It’s no secret that the Quad Cities is home to a wide selection of impressive breweries. So many, in fact, that you might find it difficult to try all of them at once, right? Well not anymore! 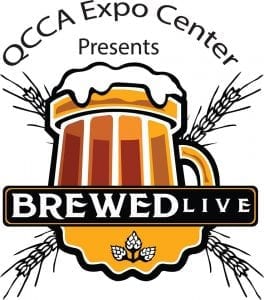 This event showcases over 35 local, regional and national breweries. Enjoy samples of tasty beverages will receiving an educational experience on beer brewing! There will even be a food truck on site, if you’re looking for a bite to eat.

In addition to the massive selection of beers, two KCBS competition cooks, Glenn (Mr. BBQ) and Ken (Bone Collector BBQ & Catering) will join forces to create 2 Men & A Smoker! Combined, the two men have over 45 years of experience. Glenn has been in the food business cooking, smoking meats & catering for over 30 years. Ken is a KCBS competitor and has many championships. He has been smoking meats & catering for over 16 years.

In addition, the following breweries will be bringing a special limited beer which hasn’t been made available to the public! These will be beers that Brewed’s host Dave Levora will be announcing every 30 minutes during the event:

For the biggest selection of brews in one place and great Barbeque food from award-winning smokers, come to Brewed Live at the QCCA!

Tess Abney
Tess Abney was born and raised in the Quad Cities. Her passion for writing and entertainment was apparent at a very young age. Whether it is sharing local events and businesses with readers or sharing her thoughts on life, she finds comfort in the way words can bring people together.
See More Articles From Tess Abney
Tagged: 2 Men & and SmokerbarbequeBBQbeerBell's BreweryBent River BrewingBone Collector BBQBrewedBrewed LivebreweriesCrawford Brew WorksEventsFront Street BreweryLena Brewing CompanyMr BBQQCCA Expo CenterQuad CitiesThings To Do