Home › Articles › Things To Do › Genesius Closes Season With ‘Ecclesiazusae’

Aristophanes’ classic comedy “Ecclesiazusae” will close the Genesius Guild‘s 2019 season with performances at 8 p.m. on July 27 & 28 and August 3 & 4 at the Don Wooten Stage in Lincoln Park, Rock Island. Ecclesiazusae is a perfect example of Aristophanes’ sharp wit and political commentary, with the jokes updated to cover modern-day themes. Performances are free. 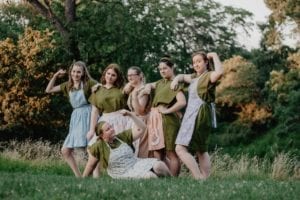 Aristophanes was a familiar and upsetting figure in classical Athens with his knack for writing plays that needled local authority figures. In “Ecclesiazusae,” Aristophanes turns the local government on its head by having the women of Athens take control of the city to create their own laws.

In its modern version of the play, the Genesius Guild maintains the basic plot but replaces the political figures with updated references. This final show of the season is an irreverent romp, poking fun at people and institutions we all recognize, and ending in a frantic “Mack Sennett” finale.

The Genesius Guild is a community theatre organization located in the Quad Cities specializing in free classical drama. Founded in 1956, the group performs Greek drama, Greek comedy, the works of Shakespeare, and other classical authors every weekend throughout the summer. The schedule also includes ballet in partnership with Ballet Quad Cities.

Sean Leary
Sean Leary is an author, director, artist, musician, producer and entrepreneur who has been writing professionally since debuting at age 11 in the pages of the Comics Buyers Guide. An honors graduate of the University of Southern California masters program, he has written over 50 books including the best-sellers The Arimathean, Every Number is Lucky to Someone and We Are All Characters.
See More Articles From Sean Leary
Tagged: AristophanesDon WootenEcclesiazusaeGenesius Guildlocal theaterRock Island