Sean Leary August 22nd, 2019 Things To Do, Rock Island, Music, Local, Fun, Events, Entertainment Share:
They’ve got the beat, and so will you if you check out Deadbeat Beat, beating a path to the door of Rock Island’s Rozz Tox, 2108 3rd Ave., Sunday. 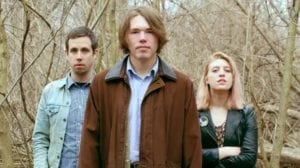 The Detroit band is hitting the stage with a show starting at 7 p.m., with Dark Family and ID Noir, in support of the 8/2 release of their sophomore album How Far on Arrowhawk Records and Crystal Palace.
Deadbeat Beat took shape as the natural extension of a friendship begun in high school by drummer/vocalist Maria Nuccilli (Outrageous Cherry) and guitarist/vocalist/songwriter Alex Glendening (Tyvek, Stef Chura, The Moles) with the later addition of bassist Zak Frieling. Their sophomore album How Far is full of jangly, indie pop confessionals that serve as reflections of asserting and maintaining a queer identity in an almost completely straight crowd. The album was in recorded in Detroit’s North End neighborhood by Jeff Else (Beekeepers) and mastered by Fred Thomas (Saturday Looks Good to Me) in between multiple self-booked tours, including dates with Guided By Voices, Anna Burch, Tacocat, Bodega and Protomartyr.
Admission is $8. For more info and tunes see How Far, by Deadbeat Beat

Sean Leary
Sean Leary is an author, director, artist, musician, producer and entrepreneur who has been writing professionally since debuting at age 11 in the pages of the Comics Buyers Guide. An honors graduate of the University of Southern California masters program, he has written over 50 books including the best-sellers The Arimathean, Every Number is Lucky to Someone and We Are All Characters.
SeanLeary.com
See More Articles From Sean
Tagged: Dark FamilyDeadbeat BeatId Noirlocal musicRozz ToxYellow UFO