One of the most popular and most recorded singers of the past quarter-century, superstar, Vince Gill, is coming to the Quad Cities! 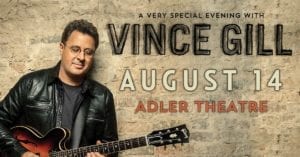 Vince Gill has become the measure of excellence in country music. His vocal performances are spellbinding, his songwriting emotionally powerful and his guitar-playing world-class. Gill’s current MCA Records album is Down To My Last Bad Habit, of which he wrote/co-wrote, co-produced and is a featured musician on all 12 songs. Gill will hit the road again with the Eagles on their 2019 World Tour. The country legend joined the tour lineup in 2017 with Deacon Frey, son of the late Glenn Frey.

Gill achieved his big breakthrough with “When I Call Your Name,” which won the Country Music Association’s Single of the Year award.  Since then, he has won 17 more CMA honors, including Song of the Year four times – making him the  most-awarded artist in that category in CMA history. Since 1990, Gill has received 21 GRAMMY Awards and has sold more than 26 million albums.  The Academy of Country Music has handed Gill 8 awards, including their prestigious “The Home Depot Humanitarian Award” and the “Career Achievement Award.” Gill was inducted into the Country Music Hall of Fame in 2007. He is also a member of the Grand Ole Opry. In August 2012, Gill was honored with a star on the Hollywood Walk of Fame.  He is a member of the six-time Grammy-winning band The Time Jumpers; Rounder Records released the band’s second studio album, Kid Sister, in 2016.

Tess Abney
Tess Abney was born and raised in the Quad Cities. Her passion for writing and entertainment was apparent at a very young age. Whether it is sharing local events and businesses with readers or sharing her thoughts on life, she finds comfort in the way words can bring people together.
See More Articles From Tess Abney
Tagged: Adler Theatrecountry musicDavenportEventsJedd Hugheslive musicQuad CitiesThings To DoVince Gill