Home › Articles › Things To Do › Cody Jinks Makes His Way to the Quad Cities!

Cody Jinks Makes His Way to the Quad Cities! 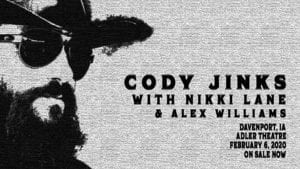 For well over a decade, Cody Jinks has devoted himself to making country music that’s equal parts uncompromising and empathic, often giving voice to those who exist on the margins of modern life. Since first emerging as a solo artist in the mid-2000s, the Texas-bred singer/songwriter has steadily advanced from playing nearly-empty bar rooms to building a following so dedicated they’ve formed their own fan club—a self-governed group called the Flockers, comprised of 21,000+ members and counting.

With his new album Lifers, Jinks reaffirms his commitment to creating music with purpose and passion, all while turning out songs overflowing with indelible hooks and unbridled energy. The follow-up to I’m Not the Devil—a 2016 release that hit #4 on Billboard’s Top Country Albums chart—Lifers also deepens the spirit of solidarity that’s long guided his every endeavor. Rooted in a relentlessly vital, rock-and-roll-steeped country sound, Lifers takes its name from those portrayed in the title track as “the struggling strifers working long after the day is done…It seems they still dream.” With his powerful yet nuanced baritone voice and lyrics that instill so much truth into one single line, Jinks attests to the work of self-preservation in an often unbending world, and ultimately leaves the listener with a profound sense of courage.

Tess Abney
Tess Abney was born and raised in the Quad Cities. Her passion for writing and entertainment was apparent at a very young age. Whether it is sharing local events and businesses with readers or sharing her thoughts on life, she finds comfort in the way words can bring people together.
See More Articles From Tess Abney
Tagged: Adler TheatreAlex WilliamsCody JinkscountryDavenportdowntownEventsmusicNikki LaneQuad CitiesThings To Do