Home » Articles » Things To Do » Cody Jinks Coming To The Adler 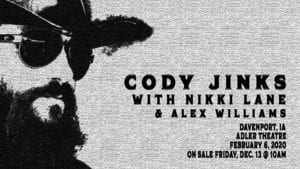 Tickets are on sale at 10 a.m. Friday at the Adler box office and http://www.Ticketmaster.com.

Cody Jinks has devoted himself to making country music that’s equal parts uncompromising and empathic, often giving voice to those who exist on the margins of modern life. Since first emerging as a solo artist in the mid-2000s, the Texas-bred singer/songwriter has steadily advanced from playing nearly-empty bar rooms to building a following so dedicated they’ve formed their own fan club—a self-governed group called the Flockers, comprised of 21,000+ members and counting.

Sean Leary
Sean Leary is an author, director, artist, musician, producer and entrepreneur who has been writing professionally since debuting at age 11 in the pages of the Comics Buyers Guide. An honors graduate of the University of Southern California masters program, he has written over 50 books including the best-sellers The Arimathean, Every Number is Lucky to Someone and We Are All Characters.
SeanLeary.com
See More Articles From Sean
Tagged: Adler TheaterCody JinksDavenportlocal concerts