Circa’s ‘Grumpy’ Will Make You Happy

Circa ‘21’s “Grumpy Old Men” will make you anything but grumpy. It’s a hilarious, ribald, dirty romp, roughly based on the beloved movie of the same name and sporting the same qualities. Prudish types may blush and bluster, but the rest of us will find it quite amusing.

“Grumpy” is set in the small northern town of Wabasha, Wisc., where ice fishing rules and a feud on-and-off-the-ice has been chilly for decades between cranky geezers John Gustafson (Luther Chakurian) and Max Goldman (Tom Walljasper). It started in high school, over a girl, and shows no signs of lightening up even as the men shadow their seventies. Therapy fellas, look into it… 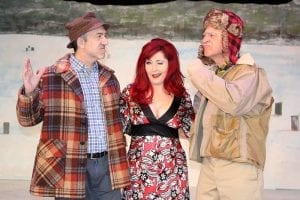 However, John and Max’s lack of emotional growth and healthy maturity is the audience’s gain, as it sets them off against each other in a near-endless stream of insults and pranks, which escalate all the more when Ariel Truax (Miranda Jane) moves to town, and becomes the object of both of their affection.

Meanwhile, hovering in the background, are subplots regarding John’s back tax bill with the IRS, which is being pursued by a shrewish Sandra Snyder (Rachelle Walljasper); a fake-then-real romance based on a running lie between Jacob Goldman (Tristan Tapscott) and Melanie Norton (Erin Churchill); and general mayhem and hilarity juggled about by the colorful array of townspeople, who all have great moments and make the most of their time in the spotlight, including optimistic Chuck Barrels (John Payonk), quirky Punky Barrels (Kim Bogus), accident-prone mailman Harry (the always-great Janos Horvath) and unrepentant cocksman Grandpa Gustafson (Bob Marcus), who’s sorry, not sorry, John, about his womanizing ways, which come back to save the day in their own way.

Like the movie, “Grumpy Old Men” is just a lot of fun. It’s got a little bit of heart, and a good message about friendship and all that, but it’s most just a good time and a couple of hours of happiness and laughter watching these growly old coots insult each other and come up with ways to make their lives miserable. It’s full of off-color jokes and ribald humor, nothing too scandalous, but basically some PG-13 innuendo and “Three’s Company” style sex jokes. But it works, and it’s zealously brought to life by the cast, who seems to be having as much fun as I was having watching them play these parts.

Chakurian and Tom Walljasper go at each other like two geriatric scorpions under a glass, ripping off raw words and jibes. Horvath is masterful in delivering his litany of mishaps and horrible luck in such cheerful fashion that you can’t help but love him. Bogus is funny and flighty as the clueless Punky. Rachelle Walljasper is way over the top as the heartless IRS agent Snyder. And then there’s the sly, snarky cocksman Grandpa Gustafson, played perfectly by Bob Marcus, sliding those one-liners in hard and fast.

“Grumpy Old Men” is everything I wanted it to be. It’s funny, it’s light, it’s cranky, it’s cantankerous, it’s ribald, and it’s just a lot of damn fun. I definitely recommend it regardless of whether you’ve seen the film, but if you have seen the movie, it’s definitely a must-see. You’ll really enjoy it.

Sean Leary
Sean Leary is an author, director, artist, musician, producer and entrepreneur who has been writing professionally since debuting at age 11 in the pages of the Comics Buyers Guide. An honors graduate of the University of Southern California masters program, he has written over 50 books including the best-sellers The Arimathean, Every Number is Lucky to Someone and We Are All Characters.
See More Articles From Sean Leary
Tagged: Bob MarcusCirca '21Denny HitchcockErin ChurchillGrumpy Old MenJanos HorvathJohn PayonkKim Boguslocal theaterLuther ChakurianRachelle WalljasperRock IslandTom WalljasperTristan Tapscott