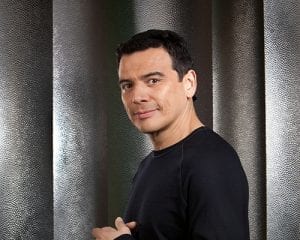 Legendary comedian, Carlos Mencia is bringing his live performance to the Rhythm City Casino Event Center stage, 7077 Elmore Ave, Davenport, Sunday, August 11, 2019 at 7 p.m. Tickets range from $25 – $35 plus applicable taxes and fees. Tickets go on sale Saturday, April 13, 2019 at 10 AM CST and can be purchased by visiting rhythmcitycasino.com or by calling 844-852-4FUN. Doors open at 6 for the 7 show. This show is for mature audiences only.

Mencia began his career doing stand-up on amateur night at the world renowned comedy club, Laugh Factory. He later showcased at The Comedy Store and became a regular, performing nightly. With his successes, he had featured appearances on “In Living Color,” “The Arsenio Hall Show,” “Moesha” and “An Evening at the Improv.”

Mencia’s journey up the comedy ladder kept going as a headliner in the “The Three Amigos” tour with Freddy Soto and Pablo Francisco in 2002, which sold out in record time around the USA. He was also featured in the independent films, “Outta Time” and “29 Palms” and starred in guest spots on “The Sheild” and “The Bernie Mac Show,” among others. In this same year, Mencia received a CableACE Award nomination for Best Stand-Up Comedy Special for his HBO special. This is where “Mind of Mencia” was born. The show was an instant hit and after the first season, Comedy Central signed Mencia back for his own original stand-up special, “Carlos Mencia: No Strings Attached.” The special was the first Comedy Central Stand-up Special DVD to achieve Platinum sales status.

Since then Mencia has starred in “Mind of Mencia,” “The Heartbreak Kid” and “Our Family Wedding.” He has done countless USO Tours and is currently going back to his roots with performances at comedy venues throughout the country. His current tour, called the “C 4 Urself Tour,” has been making stops all around the country.

Sean Leary
Sean Leary is an author, director, artist, musician, producer and entrepreneur who has been writing professionally since debuting at age 11 in the pages of the Comics Buyers Guide. An honors graduate of the University of Southern California masters program, he has written over 50 books including the best-sellers The Arimathean, Every Number is Lucky to Someone and We Are All Characters.
See More Articles From Sean Leary
Tagged: Carlos MenciacasinoscomediansComedy Centrallocal comedyMind of MenciaRhythm City