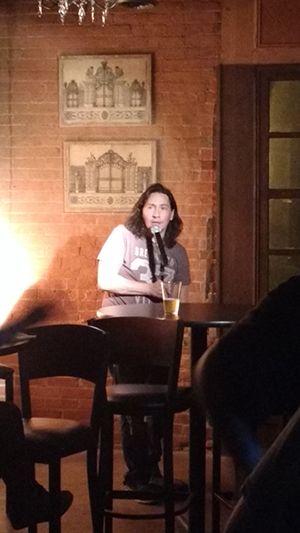 It’s hard not to like a show that begins with a disembodied voice introducing the host Donny Townsend as “the human oyster cracker.”

But, co-host Andrew “Stu” Cline loves to start the Circumstantial Comedy Show every week on a high note, before he and Townsend allow the various comics to spiral into the darkness of their souls. Every Sunday night, live comedy comes to the Village of East Davenport. Specifically to BREW, the old blacksmith shop on the corner of 11th Street and Jersey Ridge. Comedians start signing up for the deranged debacle at 9:30 p.m., with the show starting at 10 p.m. and running until midnight. Yes, the show is fairly late on a Sunday, but what else were you going to do anyway while hyped up on adrenaline from your favorite television program? As Townsend puts it, late night Sunday is “where the weird happens.”

Walking the fine line between uncomfortable and joyous laughter, the Circumstantial Comedy Show is not for the faint of heart (or funny bone). Come with an open mind, as many of the performers write jokes to offend your soul and make you question your sanity. Others see it as sort of a cynical Sunday night church service, where sins are confessed and souls are rejuvenated for the monotonous week ahead.

When asked about the “why” behind the weekly open mic, Cline replies, “The Quad-Cities have a variety of comedians who need a sandbox to experiment in.”

Townsend, who started the mic over two years ago, says, “You know, when you go to a place to do things and sometimes people show up and sometimes they don’t. That’s what Circumstantial is all about.”

Perhaps you will start your night of rabble rousing in the Village with some comedy. Or maybe you will enjoy a delightful meal at BREW and finish it with a nightcap of laughter. After all, everything is circumstantial.