Multi-platinum rock band Breaking Benjamin have announced their massive 2019 headline tour across North America this summer. The band is currently set to kick off a slew of arena dates beginning Mar 15 and wrapping Apr 10, before the extensive summer trek.

Breaking Benjamin, along with Skillett, Underoath and Fight the Fury take over the TaxSlayer Center (1201 River Drive Moline) on Wednesday Mar 20 at 6:30 p.m. 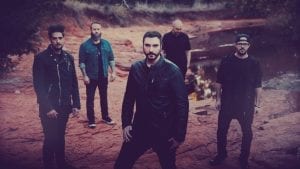 Ticket prices vary and can still be purchased at the TaxSlayer Box Office, by calling (800) 745-3000 or at Ticketmaster.com.

Tess Abney
Tess Abney was born and raised in the Quad Cities. Her passion for writing and entertainment was apparent at a very young age. Whether it is sharing local events and businesses with readers or sharing her thoughts on life, she finds comfort in the way words can bring people together.
See More Articles From Tess Abney
Tagged: Breaking BenjaminEventsFight the Furylive musicMolineQuad CitiesrockSkillettTaxSlayer CenterThings To DoUnderoath