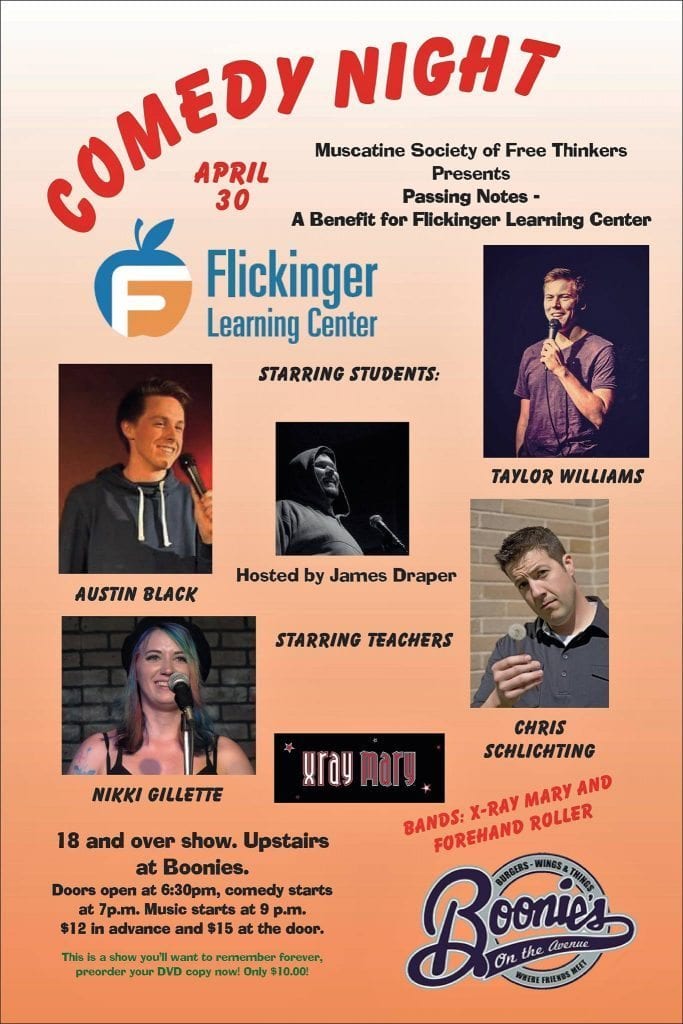 Getting your laughs on for a good cause is a win for everyone involved, and Cyndi Hartley is hoping to bring those positive vibes to Muscatine Saturday night as the Muscatine Society of Freethinkers will present a comedy and music show entitled Passing Notes: a Benefit for Flickinger Learning Center. The event will be upstairs at Boonies on Iowa Avenue. Doors open at 6:30 p.m. Comedy starts at 7 p.m. and music starts at 9 p.m. Comics on the bill include Chris Schlichting, Nikki Gillette, Austin Black, Taylor Williams and James Draper.

“The benefit came about because I was talking to the people at Flickinger and they were saying they were in need of a lot of different things but didn’t have the funding for it, so I thought why not have a benefit to help out?” Hartley said. “I contacted a lot of my favorite comedians and asked them if they would be involved and thankfully they all graciously agreed.”

Flickinger is a learning center that gives at-risk and under privileged children and adults the chance to have a safe and encouraging environment for learning. They provide after school tutoring and weekend nutritional packs for kindergarten through 5th grade students and offer adult education programs as well. Research shows that low graduation rates are tied to at-risk factors that can be measured and tracked from the 3rd grade. Flickinger Learning Center seeks to break the cycle of these factors. The potential for the increase in quality of life of a literate, contributing member of the community living outside of poverty is inestimable. More information can be found at www.FlickingerLC.com.

“It’s also nice because we don’t have a lot of live comedy in Muscatine, so it’s good to have a show like this because we need more stuff like this out here,” Hartley added. “This is a killer line up, not to be missed.”

The comedians on the bill include:

Taylor Williams:  Williams is a comedian based out of Muscatine, Iowa. His comedic style is loose and conversational, with material ranging from absurd one liners to personal experiences with mental illness and sexuality. He means well.

Austin Black: Black is 18 years old and has been doing comedy for a little over a year. “They say to talk about what you know so I mostly talk about girls…rejecting me,” Black says. “I work part time at Party City. I blow balloons up, stock shelves, cry, and customer service. Between working at Party City and how long it takes me to do my hair, my dad is proud of the little girl I’ve become. I performed at my school variety show and a mom came up to me and said `wow I’d rather watch you for an hour than Jeff Dunham.’ And I don’t even use puppets. At least, not outside the bedroom.”

Nikki Gillette: Nikki has been performing musical comedy for almost three years in the Quad-Cities. When she’s not making people laugh, Nikki also acts, writes, and sings for up-and-coming EDM group Superglacier. Nikki produces a nerd-themed traveling comedy show called Show Us Your Pokeballs which performs at anime and comic conventions around the Midwest.

Chris Schlichting: Growing up on the mean streets of Iowa, Chris Schlichting knew that he either had to take up stand-up comedy or join the notorious Midwest gang known as “The Farmers.” Described as “hilarious” by his mom and as “not having a real job” by his dad, Chris takes pride in his immature, yet sincere stand-up style.   This unique comic is quickly gaining a reputation as one of the best comics on the planet, and by “planet” we mean “his street”. With the confidence of a lion, the agility of a puma, and the intelligence of a really smart house cat, Chris is sure to leave you laughing, and wanting more.

James Draper: Draper comes from Rock Island, and brings with him some good time comedy! A stand up comedian who delivers a ton of laughs, in a variety of ways, using jokes, and limericks, stories, and songs, James keeps you smiling and quoting his stuff long after the show.

“All of the comedians are great, I’m really excited about the show,” Hartley said. “This is all about raising money and awareness for the charity, and people have been great about it. All of the comedians and everyone involved has been really cool. We’re hoping to get a lot of people out to have some fun and help out a good cause.”

Sean Leary
Sean Leary is an author, director, artist, musician, producer and entrepreneur who has been writing professionally since debuting at age 11 in the pages of the Comics Buyers Guide. An honors graduate of the University of Southern California masters program, he has written over 50 books including the best-sellers The Arimathean, Every Number is Lucky to Someone and We Are All Characters.
See More Articles From Sean Leary
Tagged: Austin BlackBooniesChris Schlichtingcomedy sceneCyndi HartleyFlickinger Learning CenterJames DraperMuscatineMuscatine Society of FreethinkersNikki GilletteTaylor Williams