Choir students at United Township High School in East Moline have orchestrated creative ways to make beautiful music together, despite the dissonant challenges of Covid-19. 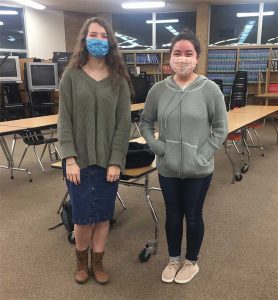 As did about 40 other Illinois high schoolers (including eight from Orion), they individually recorded a video in late March of them singing their part to “Afternoon on a Hill” by Eric Barnum, and all the videos were seamlessly merged together.

“I thought the final product was better than I expected, just because our recordings – my personal recording I had to retake it a bunch of times,” UTHS senior Aftyn Morris said Monday. “It’s a different experience than singing altogether, but I think they did a really good job editing it all 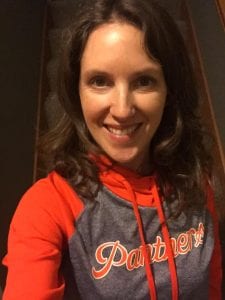 “It was a lot better than I thought it would be,” agreed UT junior Tess Earl. “When I saw it, I was smiling through my mask, it was so good. I felt like I belonged in a really big thing. It was such a great thing to hear after all the work we put into it.”

Juliet Minard, UT’s choir director, said that Bradley hosts an Honor Choir event every year and the East Moline school has sent a handful of students to campus to participate every year for at least 10 years. Any high school in Illinois is invited to nominate up to eight students, and in a normal year, students get to spent two days on campus, and be part of a combined choirs concert with the Bradley students.

“It’s a nice recruiting tool for them and a nice mass choir experience for us,” Minard said Monday of being part of a choir over 80 students.

Aftyn Morris took part as a junior on campus in the last one, in fall 2019. “It was great; I felt like I learned a lot,” she said. “I had a lot of fun singing with the higher people and learning from the college director. Being able to bring that home for me was a good experience, and the songs in general were well-performed and fun.”

UT’s concert choir is usually comprised of about 40 students.

Minard recommends students to participate at Bradley, typically upperclassmen with more experience. “They have proven a reliability,” she 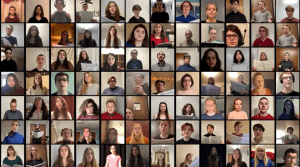 Four students from United Township and eight from Orion were part of the 84-member statewide virtual choir.

said. “These girls come to class prepared. I don’t have to give them quizzes to force them to practice. They always know their material, they are on top of things. They’re quick learners. They enjoy music.”

“Both under former director Dr. Jost and current director Dr. Ganschow, our students have LOVED their experiences at Bradley,” Haley said Tuesday by e-mail. “The faculty are all incredibly knowledgeable and personable. They have always done a phenomenal job of helping them grow in their musical abilities as well as their ability to understand and connect with the emotional heart behind a piece.

“I can’t speak highly enough of the work Bradley’s Music Department does with Illinois high-schoolers,” he said, noting this time he had two students per voice part record for the virtual choir. 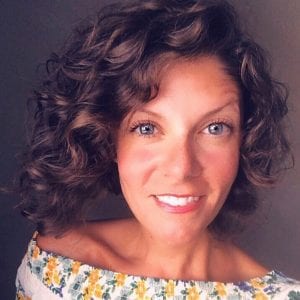 Because of Covid, the experience this year shifted online, which included a two-hour Zoom rehearsal with Cory Ganschow, the Bradley director of choral activities.

“As with most everything this year working around hybrid situations, it was challenging for the students to be motivated to prepare the material up to performance-caliber, while asking them to sing to an empty room and canned accompaniment track,” Minard said. “That’s the antithesis of why we participate in choir.

“We want community and that live sonorous moment,” she said. “But these four girls pushed through and you can see the joy and pride on their faces in the video.”

In addition to Tess and Aftyn, the other two UT students in the Bradley choir were Brooklen DeBord (junior) and Roselin Fuentes (sophomore).

“It was kind of strange. It was a good experience; it was just different,” Tess said. “Overall, it was really great.”

“I am very pleased at how this number came together,” Minard said. “We had a live rehearsal where the students were able to discuss the music and the performance with each other and with their director, which was still a good bonding time — even though it wasn’t directly in

The UTHS concert choir performed an in-person concert on March 4.

person and only included one title. It filled our hearts and the music-shaped void that we’ve been experiencing for something of this magnitude.”

Ganschow, the Bradley choir director, did a Zoom rehearsal with students March 24 (but she couldn’t hear them sing together), and they had to turn in their video recordings a few days later.

“When you’re on Zoom, you have to be muted,” she said Tuesday, noting there’s no way for a choir to sing together live online. “I’m conducting, I can’t hear a thing. My accompanist is with me. There’s very little feedback that can be given, except what I see in their faces.”

Ganschow had some students sing parts one at a time, and then gave them “a click track,” which played a metronome keeping time, with the accompaniment, and choir parts, as if they were singing with a group. Students listened with ear buds and the video only recorded what they’re singing.

The UTHS treble choir, performed an in-person concert on March 4.

It took about 50 hours for the 5-minute video to be edited together, done by Dave Lennie, Bradley’s director of instructional technology. There were 40 Bradley students in the 84-member virtual choir.

Ganschow (who’s been at Bradley for three years) had done a few other virtual choir recordings the past year, but they were just with audio and student artwork superimposed on the video.

“It is not choir – it is lacking expression,” she said. “It’s very mechanical and it’s not what choir is about. So I have struggled and the kids have too, even though it’s meaningful to create.”

The choir sound in person would be totally different, with more energy and emotion, Ganschow said.

“I was really pleased with how it came out, for that many kids doing it on their own,” she said. “I’m really proud of what they did.”

Each year, the high school students picked to partner with Bradley are the best in their home programs, are really committed and want to learn, Ganschow said.

“They’re all together and there’s that energy together,” she said of the normal visits. “There’s something to be said of everyone wanting to be there, totally committed and connecting with that.”

“The music making of all these groups of people – they don’t know each other and they come together, where people cry and feel changed and moved,” Ganschow said. “It’s just beautiful music-making.”

“If they have a good experience – especially a good experience with me, hopefully, they think I’d like to continue singing with her,” she said. “I like this campus, this performance hall. I’m gonna check out Bradley.”

“I’ve been so impressed by the students,” she added of the virtual choir. “They just want to create something, they want to connect. They want that so badly. They’ll do whatever it takes.”

Minard didn’t have prior experience with virtual choirs, though she tried a couple options with her students earlier in the school year, but they didn’t work out.

“There were just always glitches of students’ missing work, or long-term Covid isolations from contact tracing or actually being ill, or sound system tech hindrances,” she said. “After we experienced the disappointment from unsuccessful attempts, we threw in the towel and did a 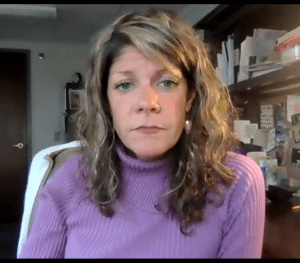 private concert for parents only.”

“It was a special, private concert. Each child was allowed to have two guests,” Minard said of the March 4 concert in the school’s new commons area, with students distanced and wearing masks. “We pulled it off.”

“We would have never considered doing a performance after only 14 rehearsals, but you work with what you’re given,” she said, noting 13 of those rehearsals were with the two choirs of 14 each (one all female) split into morning and afternoon rehearsals.

The female choir first sang for their parents; they all left the room and it was cleaned, before the concert choir did their section. Parents sat at separate tables.

“Two things happened – they got to sing for an audience, which really was fulfilling,” Minard said. “It was satisfying to see people engaging with us about the music, and have that emotional connection. Also, we got to combine our a.m. section and p.m. section of students, so we doubled in size, getting to be combined. So that was really satisfying and fulfilling for them.”

“The students were really excited to sing for an audience and it made for a fun night,” she said of the concert.

“It felt good to sing with everyone despite the masks and Covid restrictions,” Tess said. “The private concert felt more intimate. It was a good experience. It felt good after being socially away from everyone.”

“It was definitely fulfilling to sing in front of your family and actually have a concert,” Aftyn said. “I’m a senior, so that was kind of what I was 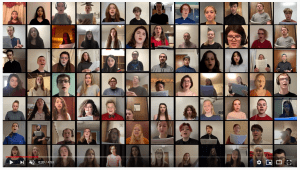 envisioning for my senior year, and the fact that that was able to happen was definitely nice.”

She is planning to go to Black Hawk College, doing choir and band there, and then finish her bachelor’s in music education and music therapy from Western Illinois University.

“I’ve been doing since I was in 5th grade; I liked the feeling that it gave me finding my passion,” Aftyn said. “I’d enjoy seeing that in other kids and adults. It’s definitely a fulfilling feeling, expressing your emotions and feeling the music.

“Music therapy is like, you’re helping people with your passion,” she said.

Students (and choirs everywhere) obviously prefer singing with others in person.

“I prefer to be with other people; you get the feeling of what the song will sound like,” Tess said. “When I was doing my song by myself, it was harder to understand my part when all I heard was my part. I really like being together with everyone, because it brings the feeling of togetherness, instead of being by yourself.

“It gives you the sense of people backing you up whenever you are in a group,” she said.

Jonathan Turner
Jonathan Turner has been covering the Quad-Cities arts scene for 25 years, first as a reporter with the Dispatch and Rock Island Argus, and then as a reporter with the Quad City Times. Jonathan is also an accomplished actor and musician who has been seen frequently on local theater stages, including the Bucktown Revue and Black Box Theatre.
See More Articles From Jonathan Turner
Tagged: bradley universitychoirsunited township high schoolUTHSyouth choir