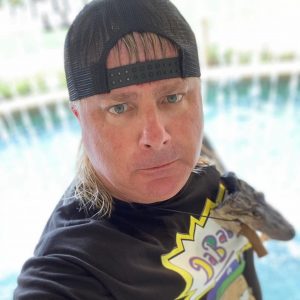 catchphrases such as ‘I’ll say it right to your face’, ‘I swear to God’ and ‘State Law!’ Sexton plays the perfect archetype of the Kentucky redneck caricature.
The character of Baker first made an appearance on The Bob & Tom comedy radio show in 2005, when Sexton was doing voice work on a number of characters for popular episodes. After growing attached to a particular character, Sexton decided to take it to the stage and so developed Donnie Baker and the Pork Pistols – a comedy band playing songs like ‘Not my Rubber’ and ‘Okay to Drive’. Finally, in 2015, Sexton took Donnie Baker to YouTube, where his most popular video ‘Missing Boat during Shark Week With Donnie Baker’ has now accrued over three million views.
As an only child, Sexton says that he paid a lot of attention to the imaginary friends he made in his head, which has clearly attributed to the level of details he puts into characters like Baker, making them so popular with an audience. Basing his writing on people that he met at high school, Sexton says that after travelling to perform Donnie Baker, he realised just how universal the character was. ‘Everybody works with, everybody went to school with, or everybody is friends with’ somebody like Donnie, he says. Baker continues to perform with a growing fanbase around the world.
Show Details:
-Limited capacity
-First come, first serve general admission seating
COVID-19 Safety Precautions
While there is no guarantee of an illness-free event, it is indisputable that planning, training, and implementing reasonable health and safety measures are the best ways to protect this live event and the people who create it.
We will follow any city, county, or state guidelines or laws that pertain to COVID-19 response. In addition to any local requirements, we will implement and enforce various practices ourselves.
Advertisement

Sean Leary
Sean Leary is an author, director, artist, musician, producer and entrepreneur who has been writing professionally since debuting at age 11 in the pages of the Comics Buyers Guide. An honors graduate of the University of Southern California masters program, he has written over 50 books including the best-sellers The Arimathean, Every Number is Lucky to Someone and We Are All Characters.
See More Articles From Sean Leary
Tagged: ’ comedybob and tom showdonnie bakerq106.5Rust Belt