MACOMB/MOLINE, IL – After a year-long promotion process, Western Illinois University Veterans Resource Center Director Ron Pettigrew was promoted to the military rank of captain (0-6). His new rank was pinned on his uniform this summer.

This branch of service is a familiar one to Pettigrew’s family.

“My dad served in the Navy for 22 years. When he got out, he worked in civil service in the same field,” he said. “I traded my dependent military identification card for one of my own. I grew up in military towns, with Navy role models, and families who cared about me and impacted me.”

Pettigrew, also a military chaplain, didn’t initially have an interest in following in his father’s footsteps, but traveling to Washington, DC with the Freedom Foundation in high school, and meeting the president, visiting the Supreme Court, and chatting with a Soviet dissident at Valley Forge changed his path.

“I clued in, even as a teen, that freedom isn’t free,” he said. “I was involved in the church and thought I wanted to be an agricultural missionary overseas. But after that experience in DC, I prayed to the Lord and felt the Lord bring serving in the Navy more with what He 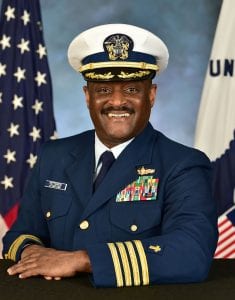 would have me do.”

Pettigrew graduated through the Navy’s ROTC program at the University of Southern California and was assigned to a ship from San Diego that deployed to the Persian Gulf during Operation Desert Shield and Storm. He spent two years in the Middle East as a surface warfare officer. During that time, he also saved money to attend the Trinity Evangelical Divinity School to become a chaplain.

After completing seminary, he became familiar with WIU during his first pastoral assignment at a church in Rock Island. During this time, he was part of the Navy Reserves and drilled at the Rock Island Arsenal, until just shortly before the attacks of Sept. 11 happened and he was called up for active duty overseas.

Upon his return from overseas, Pettigrew returned to the Reserves, and decided to use his Illinois Veteran’s Grant and GI Bill benefits to enter WIU’s College Student Personnel (CSP) graduate program. During this time, he said the faculty and staff he met at WIU provided the support he needed as a non-traditional student to re-adjust from multiple tours in combat or supporting those in combat.

“From the value CSP Professor Tracy Davis and former Gwendolyn Brooks Cultural Center Director Belinda Carr saw in me, and the encouragement they provided, I not only was able to graduate with my degree in 2009, but also transition to work in higher education,” he said.

Six months after receiving his master’s degree in CSP, Pettigrew was hired as an academic advisor for WIU’s Bachelor of General Studies (BGS) program, where he found a niche helping students with military backgrounds. He said other WIU employees, Larry (Lawrence) Pickett and Jennifer Tibbitts, helped cover his case load when he was activated multiple times for military duty.

“I could not have continued to serve without them,” he said.

Pettigrew went to work in the Veterans Resource Center in 2018, and said he was impressed with WIU’s “one stop shop” for helping veterans transition from active service to higher education.

“The VRC offers a safe space; they can come into the VRC and it’s a home away from home,” he said. “It’s someone being there who understands what they’ve been through.”

In addition to his service with the Navy, Pettigrew serves as the Reserve Deputy Chaplain for the U.S. Coast Guard. He said he tries to be proactive with the chaplains he oversees to make sure they are trained and prepared to respond to emergencies and disasters.

“Only about one in 15 Navy officers reach the rank of captain in the Navy,” he said.

More important to Pettigrew than his rank is his calling.

For more information on the VRC at WIU, visit wiu.edu/student_services/veterans.

Sean Leary
Sean Leary is an author, director, artist, musician, producer and entrepreneur who has been writing professionally since debuting at age 11 in the pages of the Comics Buyers Guide. An honors graduate of the University of Southern California masters program, he has written over 50 books including the best-sellers The Arimathean, Every Number is Lucky to Someone and We Are All Characters.
See More Articles From Sean Leary
Tagged: ron pettigrewWestern Illinois UniversityWIUwiu veterans resource center