St. Ambrose University senior Tyler Hughes made his full-length directing debut in the middle of a global pandemic, with another tense story 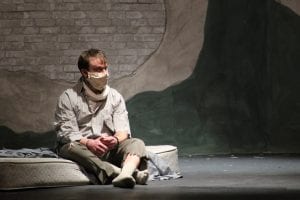 “Two Rooms” by Lee Blessing – a love story of Lainie and Michael, married American educators working in Lebanon during the mid-1980s – features four student actors and was filmed earlier this month, to be streamed this weekend.

After Michael is kidnapped by terrorists, Lainie returns to the United States to seek out help from her government to have Michael rescued, only to be stonewalled by the American policy that states: “We do not negotiate with terrorists.”

With no options remaining, Lainie must find a way to make the U.S. government understand the severity of the situation, and what will happen if Michael is not rescued.

The students in the Ambrose production are Amber Cook and Kyle DeFauw as Lainie and Michael, with T.J. Green and Peyton Reese. In “Two Rooms,” Reese plays the government representative, Ellen, and Green plays the 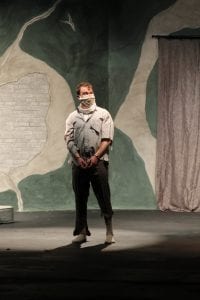 Hughes, a theater major from Naperville, Ill., has directed a couple one-acts before and chose this play because it was easier to produce during Covid times.

“It’s a small cast, and has a lot of scenes of people alone,” he said Thursday. “Beyond that, what called me to it — there’s a lot going on in the play that’s unhappy with how the government handles things. That’s something that’s relatable now. This woman is trying to deal with the government, get her husband back from being a hostage victim.

“It was something that was relatable to me, told a story that was worth sharing during this time,” Hughes said.

The two rooms of the play’s title are a windowless cubicle in Beirut, where Michael is being held by Arab terrorists, and a room in his home back home, which his wife has stripped of furniture so that, at least symbolically, she can share his ordeal, according to a Dramatists Play Service synopsis.

In fact, the same room serves for both and is also the locale for imaginary conversations between the hostage and his wife, plus the setting for the real talks she has with a reporter and a State Department official.

The former, an overly ambitious sort who hopes to develop the situation into a major personal accomplishment, tries to prod the wife into 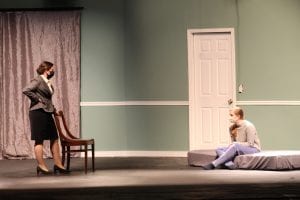 A scene with Peyton Reese, left, and Amber Cook.

taking umbrage at what he labels government ineptitude and inaction, while the State Department representative is coolly efficient, and even dispassionate, in her attempt to treat the matter with professional detachment.

It’s her job to try to make the wife aware of the larger equation, of which the taking of a hostage is only one element, but as the months inch by it becomes increasingly difficult to remain patient. The wife is finally goaded by unforeseen developments to speak out against government policy and, in so doing, triggers the tragic series of events that brings the play to its startling conclusion.

“In the end there are no winners, only losers, and the sense of futility and despair that comes when people of goodwill realize that logic, compassion, and fairness have become meaningless when dealing with those who would commit such barbarous acts so willingly,” the synopsis says.

A 2008 Variety review said the 1988 work is “that rare political play that survives beyond its period not merely because it remains timely, but because its characters and conflict cut close to the bone. The four-hander about a hostage in Lebanon and his worried wife at home is a favorite among college theater programs, largely because it’s easy to produce and hard to screw up,” Variety wrote.

Staying safe on the Galvin stage 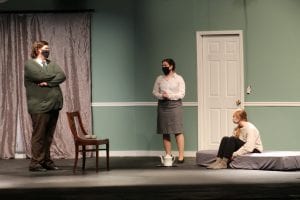 From the beginning of rehearsals in mid-January, Hughes said they didn’t want to do it live with a limited audience.

“I didn’t want to put that risk out there,” he said, noting the actors all wore masks on the auditorium stage at Galvin Fine Arts Center. “I wanted to play it safe, looking into different streaming options, and filming the show.”

“For the most part, I tried to keep them a good distance from each other, so that it looked natural enough,” Hughes said. He worked with Don “Duke” Schneider (the operations manager and instructor for SAU TV), who primarily filmed and edited the 110-minute play, with two cameras.

“He was really helpful,” Hughes said. “There are some scenes where he’s zooming in, has a certain angle on the set where the actors are talking.” 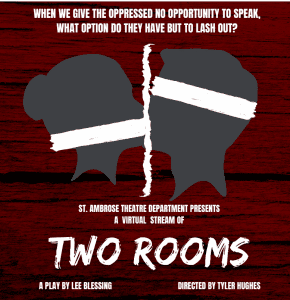 The promotional poster for St. Ambrose University’s “Two Rooms,” to be streamed this weekend.

Though the actors performed in an empty theater, it was overall less stressful for everyone.

“It was amazing not having to worry about that, since with a live show, you are worrying that any one thing could go wrong in the show, and everything falls  apart,” Hughes said. “We could get the best take possible, and every transition you do at your leisure. It was very freeing.”

Hughes was recently featured as a “Senior Spotlight” on the SAU website.

A sophomore, Amber Cook was last in “Time Stands Still” at SAU in fall 2019. She’s a psychology major with minors in theater and biology, and did theater at her high school in Manchester, Iowa.

“I enjoyed doing it in high school and decided to do it college as more of a hobby,” Cook said. “I like to act once in a while and do whatever they need for backstage stuff.”

She felt very safe doing the new play. “We tried as hard as possible to keep our distance,” Cook said. “We were all adhering to policies outside of the theater.”

“I was missing theater and this play came up, and it was something a little out of my wheelhouse,” she said, noting she often does more comedy.

Cook said that Michael interacts with other characters in dream-like sequences, and also has monologues as he’s held captive.

They filmed the play over a weekend early this month. Cook said it was a very different experience, with no audience and the chance to do multiple takes of a scene.

“I definitely like performing in front of people; I love to see people’s reactions and hear them,” she said. “I am very interested in how this turns out.” 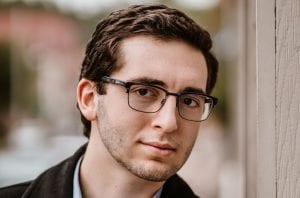 Cook appreciates having the video available for anyone to see it, no matter where they are, including friends and family.

“I’ve sent the link out for people – some of my former high school directors, because they were interested,” she said. “They’ve never been able to make it up here to see me in anything, so this is an opportunity they’re gonna get to see.”

Though we’re living through a global public health crisis, having to be in a play with a serious, stressful subject wasn’t difficult, Cook said.

“For being in a pandemic, I was actually excited to be part of this,” she said. “For me, it was almost more of an escape from what was going on.”

“Tyler was really great to work with; I’ve actually worked with him before,” she said of Hughes. “I really like the way he directs, and how he guides you but also lets you put your own creative input in as well. It’s really good opportunity for students to get a good feel of what directing feels like.”

This show discusses mature themes, including abduction, violence, and sounds of war, and may not be suitable for some audiences.

The virtual performances will be streamed at 7 p.m. Friday, Feb. 19, Saturday, Feb. 20 and Sunday, Feb. 21, and will be available at any time throughout the weekend, after 7 p.m. Friday with a link from ShowTix4U, Hughes said. Tickets are $7 and available at www.sau.edu/two-rooms.

Jonathan Turner
Jonathan Turner has been covering the Quad-Cities arts scene for 25 years, first as a reporter with the Dispatch and Rock Island Argus, and then as a reporter with the Quad City Times. Jonathan is also an accomplished actor and musician who has been seen frequently on local theater stages, including the Bucktown Revue and Black Box Theatre.
See More Articles From Jonathan Turner
Tagged: dramatists play servicelee blessingSt. Ambrosest. ambrose theaterSt. Ambrose Universitytwo roomstyler hughes