While the live-music industry has been decimated by coronavirus, including Davenport’s River Music Experience, it was the massive insurrection 843 miles away in Washington, D.C. on Wednesday that postponed the planned online 200th episode of RME’s Music Lab. 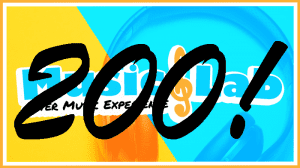 Wednesday, RME posted on Facebook they were postponing the episode until Thursday due to the chaos in Washington, D.C., at the Capitol building.

“This is a historic moment in our nation’s history. As we witness a violent assault on our capitol and attempted coup on our democracy, we believe every American should be following these events,” RME said, encouraging people to follow coverage of the historic riots at WVIK Quad Cities NPR.

Though aimed at kids ages 8 and under, it’s meant to be enjoyed by students and families of all ages – featuring fun singalongs and learning about popular musicians and musical styles. Since the Covid shutdown started in mid-March 2020, Music Lab aired weekdays on Facebook Live at 10 a.m., and later on Mediacom, but this month, it’s switched to airing at 3:30 p.m., for students who have returned to school in-person, so they can see it live. 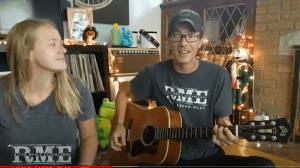 Kate Dale and her husband Bret doing an episode from their Moline living room.

Kate Dale said Thursday morning that they planned to include RME education coordinator Ben Schwind – who’s a frequent Music Lab guest – on the 200th episode, and he will be back today.

“At first when the protestors were down there, just after they started breaching the Capitol, and we heard shots are fired, this is a completely different event now,” Kate said of postponing Wednesday’s livestream. Bret contacted RME executive director Tyson Danner, and they agreed everybody should be watching the news then, and “we can celebrate another day,” she said.

“The plan is to move forward with it today,” Kate said. “Congress got back to their duties. I just think that’s so wonderful, a show of strength. They were showing solidarity, the strength through that is a huge accomplishment.” 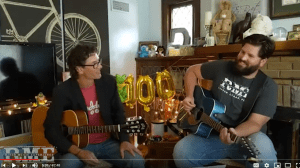 Congress returned to the Capitol late Wednesday night, working past 3 a.m. to certify the Electoral College victory of Joe Biden as 46th president of the United States.

Danner said postponing the Wednesday Music Lab was an obvious choice, and that it’s been crazy how the time has flown by. 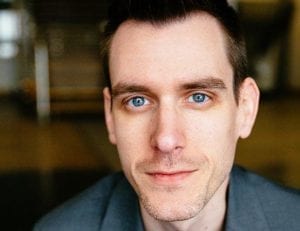 “Music Lab has been a joy for us to create,” he said before Wednesday. “We started the program within a week of closing our doors to the public back in mid-March. At that time, we had no idea how long the shutdown would last, or how much virtual programming we’d actually end up doing. Our main goal was simply to find ways to keep doing our mission, despite all the obstacles that were placed in our path.”

Music has attracted over 40,000 viewers so far, from 23 states and even London, Danner said.

“The past 10 months have been challenging, but the most important thing to us has always been ‘how do we keep bringing music to our community?’,” he said by e-mail. “Music Lab has been a great source of fun and entertainment for kids and families cooped up at home, but it has also been an important educational experience that’s filling a need in our community.”

To see the program, visit RME’s Facebook page, and you can see past episodes on their YouTube playlist.

Jonathan Turner
Jonathan Turner has been covering the Quad-Cities arts scene for 25 years, first as a reporter with the Dispatch and Rock Island Argus, and then as a reporter with the Quad City Times. Jonathan is also an accomplished actor and musician who has been seen frequently on local theater stages, including the Bucktown Revue and Black Box Theatre.
See More Articles From Jonathan Turner
Tagged: Bret Dalekate daleRiver Music ExperienceRMErme music labTyson Danner