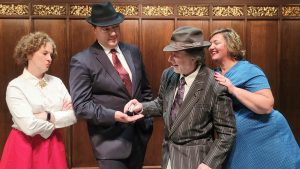 Loesser’s classic musical “Guys and Dolls” on Friday, July 23 and Saturday, July 24. This production was originally scheduled for March 2020 and postponed as Covid-19 entered the Midwest just two weeks prior to opening night. After a series of further postponements, the church’s Performing Arts Series is pleased to produce the fully-staged musical with its original cast, crew and an orchestra. 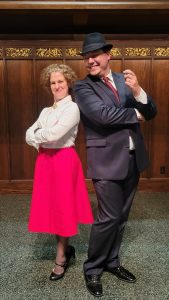 Jennifer Cook Gregory as Sarah Brown and Patrick Downing as Sky Masterson, in “Guys and Dolls” at First Presbyterian, Davenport.

produced with in-house talent and a top-notch creative team from the church that handles set design, props, costuming, choreography, and direction.

“Guys and Dolls” is one of the touchstone musicals in the theatre repertoire, according to First Presbyterian music director Matthew Bishop. The multiple Tony Award-winning show has been revived multiple times on Broadway following its 1,200-performance run after its 1950 opening. This fast-paced comedy was made even more famous by a 1955 movie adaptation starring Marlon Brando, Jean Simmons, Frank Sinatra, and Vivian Blaine. The show includes such great songs as “Luck Be a Lady,” “The Oldest Established,” “If I Were a Bell,” and “Sit Down, You’re Rockin’ the Boat.”

Showtimes are 8 p.m. on Friday and 4 p.m. on Saturday. Tickets are $15 for adults and $10 for students, and are available at the door or online in advance, at https://bit.ly/2V8nEgm. Masks are required for all attendees, cast, and crew. For more information, visit www.fpcdavenport.org.

Jonathan Turner
Jonathan Turner has been covering the Quad-Cities arts scene for 25 years, first as a reporter with the Dispatch and Rock Island Argus, and then as a reporter with the Quad City Times. Jonathan is also an accomplished actor and musician who has been seen frequently on local theater stages, including the Bucktown Revue and Black Box Theatre.
See More Articles From Jonathan Turner
Tagged: Davenportfirst presbyterian churchguys and dollsQuadCities theater