The pandemic has suppressed live theater performances and movie theaters alike, but it hasn’t brought down Leslie LaCorte’s spirits. LaCorte, a Language Arts/Theater instructor at North High School in Davenport, IA, is working to keep her students excited about acting by turning it into a virtual experience.

Back in early 2020, LaCorte’s theater students were working to stage a production of the musical, Into The Woods. but then the COVID-19 virus began to spread. The resulting national pandemic made it necessary to cancel the production. 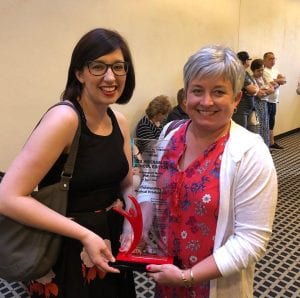 “We kept up rehearsals online,” she said, “we thought things might get better, but it became clear that the show just had to close down. Kids had even built the props at home. One had built a cow called Milky Way for the show! We kept the cow – we couldn’t bear to get rid of it.”

LaCorte’s interest in theater began in college, when she became involved with set design and the technical aspects of products. She worked as a stage manager for productions, and her love of theater continued to grow. In time, she received a master’s degree for teaching theater from Wayne State in Michigan.

LaCorte noted that many kids these days are developing their theatrical skills without even knowing it, thanks to their regular creation of online videos. “Some of these kids post Tik-Tok videos 20 times a day,” she said. “They also know how to edit their videos and upload them to YouTube.”

LaCorte is pleased that many of her students are involved with a project called the Virtual Iowa Thespian Festival, for which she is one of the directors. “The platform for the festival is Zoom, with workshops and pieces submitted by video,” she said.

Participants in the festival have access to workshops led by theater professionals and performances from schools around the state. They also audition for thespian and college scholarships, and showcase their talents in a program called the Thespy Awards.

“Many North High School kids are interested in the Virtual Iowa Thespian Festival,” LaCorte said. “The festival will take place throughout the month of March 2021.”

North High School has performance projects in store for the future, and students who wish to participate in the school’s projects should visit http://davenportnorthdrama.weebly.com/. On that webpage, they can download and fill out forms that can help them to proceed, and to decide how they want to be involved. The forms include a consent form that interested students need to share with their parents.

“Leslie LaCorte is an amazing teacher who has taken our theater program to amazing new heights,” said Jay Chelf, Principal of North High School. “The shows that she and our students have put on are second to none. The number of students involved in theater continue to rise as more and more students want to be involved. There is a lot of pride in the actors, the set designers, the set builders, and all of the other pieces that it takes to put on a top-notch show. Mrs. LaCorte is dedicated to all North students and works very hard every day to help all students be successful and enjoy high school.”

LaCorte also teaches Speech at North High School. “It’s a good class for introducing kids to the business world,” she said. “In Speech class, they can learn and practice skills they will need to use at job interviews, and to give presentations at work. For some kids who seem shy, you think it might be hard for them, and it’s great when they come through better than you thought they would.”

North High School is located at 626 West 53rd Street, Davenport, IA. To find out more about the school, visit http://www.davenportschools.org/north/.

Sean Leary
Sean Leary is an author, director, artist, musician, producer and entrepreneur who has been writing professionally since debuting at age 11 in the pages of the Comics Buyers Guide. An honors graduate of the University of Southern California masters program, he has written over 50 books including the best-sellers The Arimathean, Every Number is Lucky to Someone and We Are All Characters.
See More Articles From Sean Leary
Tagged: davenport northjay chelfleslie lacorteNorth High Schoolvirtual iowa thespian festival