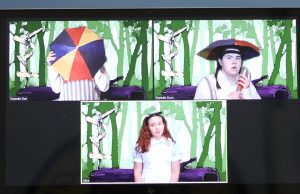 Can we ever get out of the rabbit hole? That eternal question is more relevant today than ever, as Davenport Junior Theatre (DJT) continues its 69th season with its second virtual production, “Alice in Wonderland,” directed by local theater artist Bobby Becher.

Based on Lewis Carroll’s “Alice’s Adventures in Wonderland” (1865) and adapted by Daniel DP Sheridan, “Wonderland” is a timely story that speaks directly to the viral Wonderland we’ve all found ourselves in over the last year.

“Alice in Wonderland” involves 24 students from around the Q-C area. The kids range from ages 10-18, and perform the entire show from virtual stations they’ve set up in their homes, opening this Saturday.

Local professional artists work with the kids, creating a virtual performance that will be livestreamed and available to watch for free on the DJT website. 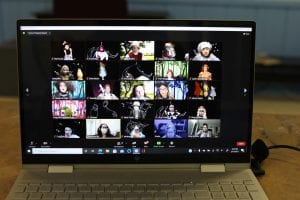 The full cast of the virtual “Alice in Wonderland.”

“We wanted to make this show as accessible as possible,” says Ben Gougeon, DJT’s artistic director, “trying to get lots of kids involved and reach as large an audience as we can. This year has been challenging in so many ways, and we’ve tried to keep our focus on engaging kids, whether it’s by actively participating in our virtual productions, taking classes, or by tuning in and going down the rabbit hole for 75 minutes.

“By offering the show free of cost and eliminating paid tickets, we’re able to take down one extra barrier for someone to watch,” he said.

“Alice in Wonderland” follows Alice, played by Julia Reagan, as she falls down a rabbit hole and enters a world of strange, sometimes nonsensical characters. They challenge Alice’s conceptions of the world, and force her to question what she knows and re-evaluate what she previously thought of as a life without adventure. 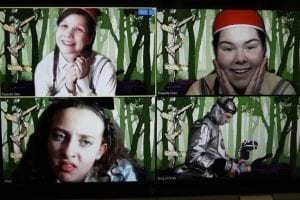 This is the eighth time DJT has produced “Wonderland,” but the first virtual production. Director Bobby Becher has worked to create a production that’s true to the heart of the story and the stage, but in a virtual setting.

“It’s always an honor to work with an institution like DJT — one with a special kind of history,” says Becher, “and a dear place in the heart of this community. And that almost makes these virtual projects that much more special. DJT didn’t have to pivot or adjust; when the world reopened people were always going to come back. But they did. They’ve continued to really 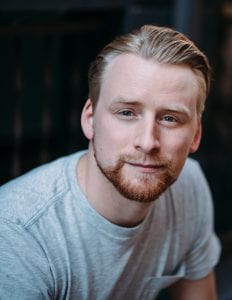 Bobby Becher is director of “Alice in Wonderland.”

practice what they preach, and are prioritizing the kids in this community who are desperate for creative and social outlets.

“And this group of kids has really embraced the virtual theatre format,” he says. “Both the challenges and the opportunities. We as a production staff have strived to keep the “T” in DJT as much as possible, but we also see this as a chance for kids to learn and grow in new ways that maybe wouldn’t have been in the front of our minds in a traditional DJT mainstage process.”

Founded in 1951, Davenport Junior Theatre is the nation’s second-oldest children’s theatre. Classes (both 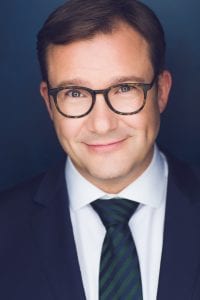 virtual and in-person) and camps are offered year-round in theatre and dance for students ages 3 to 18. Classes are as varied as acting, improvisation, musical theatre, puppetry and theatrical design.

In the quickly-growing dance division – which is now in its 9th year – young dancers learn poise and confidence while having fun and making friends in a noncompetitive dance environment.

Summers see a myriad of camps and other activities for kids of all ages. Through all these opportunities, DJT prepares kids for a lifetime of success, no matter what path their lives may take.

The 75-minute show (intended for kids of all ages) can be viewed for free via livestream at www.davenportjuniortheatre.org/alice-livestream.

Jonathan Turner
Jonathan Turner has been covering the Quad-Cities arts scene for 25 years, first as a reporter with the Dispatch and Rock Island Argus, and then as a reporter with the Quad City Times. Jonathan is also an accomplished actor and musician who has been seen frequently on local theater stages, including the Bucktown Revue and Black Box Theatre.
See More Articles From Jonathan Turner
Tagged: Alice in Wonderlandben gougeonDaniel SheridanDavenport Junior TheaterQuadCities theatervirtual theater