Like most musicians, Joe Nichols is just glad to be back playing live in front of a paying audience.

The 43-year-old Arkansas native will bring his traditional country sound to Murphy Park at The Bend, East Moline, Saturday at 8 p.m. It’s an acoustic show with a few other accompanying performers, and two opening acts.

This is the first concert at the park (next to The Hyatt, Bend Event Center, and near The Rust Belt) since Sept. 11, 2019, when Murphy Park concluded its 2019 summer concert series. 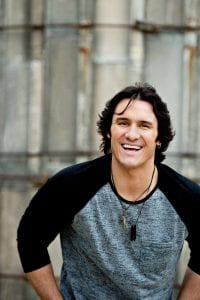 “Any time we can play live, we look forward to it,” Nichols, who lives in Tyler, Tex., said in a Tuesday phone interview. East Moline is among just about a half-dozen tour dates he’s doing this fall, through mid-December, in socially-distanced outdoor and indoor venues. Like for many artists, 2021 is still up in the air.

Nichols is one of country music’s most praised traditional artists. His 2013 album “Crickets” debuted in the Top 3 on the Billboard Country Albums Chart and spawned the two multi-week #1 singles: the gold-certified hits “Yeah” and “Sunny and 75.”

Nichols has six No. 1 hits plus eight Top 10 singles to his credit, including chart-toppers like “Brokenheartsville,” “Tequila Makes Her Clothes Fall Off,” and “Gimmie That Girl,” and Top 10 smashes like “The Impossible,” “If Nobody Believed In You,” “What’s A Guy Gotta Do,” “Size Matters,” and “I’ll Wait For You.”

The 4-time Grammy nominee is the winner of the Academy of Country Music’s “Top New Male Vocalist” award, the CMT “Breakthrough Video of the Year” award and the prestigious “Horizon Award” from the Country Music Association.

His last full-length album was 2017’s “Never Gets Old,” which rekindled the original passion for his music making. 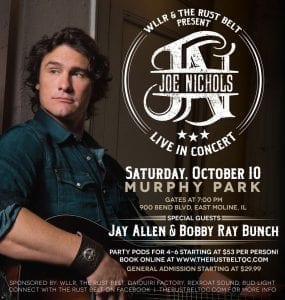 “The 12-track project is relatable and reflective as his smooth, baritone voice draws listeners in and the story-telling lyrics keep them entertained,” said a review at soundslikenashville.com.

Another review of the record, album, at digitaljournal.com, said:

“The neo-traditionalist has managed to outdo himself. There are no filler tracks on this collection, and the songs are eclectic and refreshing. It is one of those country records with a retro feel to it that ought to ‘never get old,’ to quote its title.”

“Instead of us making something that’s built for instant success, the idea was ‘Let’s make something we’re gonna be proud of 30 years from now,’” Nichols said in his bio at joenichols.com. “I’m thinking less about what will work, and more about what I love.”

What Nichols loves has always been obvious. Growing up around friends who were into anything but country, he was different. Nichols was pulled in by the realness of singers like Merle Haggard and Marty Robbins, Don Williams, Keith Whitley and George Strait, and that connection would inform his whole career, his bio says. 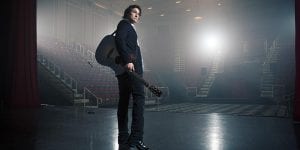 “Hopefully the stuff we’re doing lasts a lot longer than today’s typical country record,” Nichols said. “But I think the irony is that retro sounds are actually what’s fresh and new right now. All we had to do was what felt natural.”

While he had a full 2020 touring schedule planned, Covid had other plans, forcing him to quarantine at home with his wife, with whom he has two kids ages 6 and 8. Nichols also has a 22-year-old daughter from a previous relationship, who was home briefly.

“My problems aren’t unique,” he said Tuesday of the societal shutdown. “Everybody’s dealing with different sets of circumstances. We’re trying to make do. The thing that’s been good for me is more time at home with the family and also making more music.”

Normally, touring takes away time from writing and recording music, so Nichols said he’s been glad to get back into the studio. Though he’s writing more, it hasn’t been nearly the pace of the first part of his career, starting in the late ‘90s through about 2007, he said. 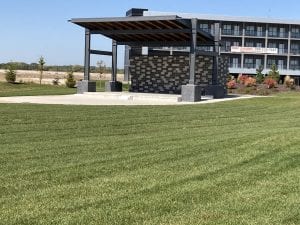 “Writing sharpens your vocal chops, gives you more confidence in what you can or can’t do,” Nichols said. “I’ve always had the philosophy since I was very young, that to be able to write great songs is great, but to give up on others’ great songs for your own songs, I think is a mistake some artists make.”

Country legends he admires, like George Strait and Conway Twitty, often had big hits with other songwriters’ material and that didn’t make them less great artists, Nichols said.

On his last album, he didn’t have any songwriting credits, but “it wasn’t for lack of trying,” Nichols said. “Writing is a tricky thing. We can force ourselves to like something that is not as good as think it is.”

“My greatest passion is performing in front of people,” he said. “I’ve always prioritized singing and performing over writing. You’ve got to do what you’re passionate about.” 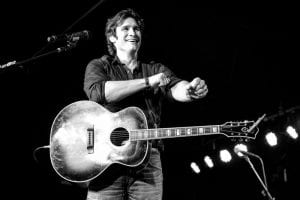 During this transitional period, Nichols has been writing some with the son of his best friend – Chance Pena, an L.A.-based songwriter who’s been featured on “The Voice” and is originally from Tyler, Tex.

Nichols said he’s working both on an EP and recording songs for a full-length album, both aimed to finish by late 2021.

Though he loves his kids to death, he said helping with homeschooling this spring was rough.

“I was miserable at it,” Nichols said. “It’s been so odd to step into that world.”

Fortunately, his little kids are back to school in person, with no issues, he said.

Nichols added he likes doing outdoor shows, when people are pumped and “in a Woodstock vibe,” but he also likes the intimate atmosphere of an indoor theater. 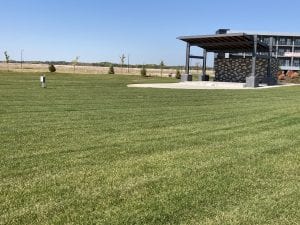 “I’m a big listening guy,” he said. “Some songs are not made for an outside festival crowd. The outdoor vibe us usually more of a party scene. It’s hard to get people’s attention. What I really like is when people pay attention to the small details.”

On Saturday, Nichols will have two opening acts – Jay Allen and Bobby Ray Bunch. A small-town Iowa native, Allen moved to Nashville in 2013, an in 2017 was honored as “The Highway Find” on Sirius XM with his song “Sounds Good to Me.”

Tickets range from $30 for general-admission lawn seating, to up to $58 per person for designated pods in the park.

Every aspect of the event is designed to follow the recommended social distancing and safety guidelines. There will be 68 10-foot-by-10-foot square pods spread out over the park. The pods will be clearly designated, spaced at least 6-feet apart, and are sized for groups of up to 6 people.

The pods can accommodate up to 6 people, and to purchase a pod, you must purchase 4-6 tickets.

Guests should bring lawn chairs or blankets to enjoy the grassy lawn. Please ensure that both the people in your group and items you bring can comfortably fit within the designated pod area. Aisles and space provided for required social distancing must be kept clear.

Outside coolers are not allowed, but drinks will be available for purchase. You can buy Saturday concert tickets at Eventbrite.com.