After more than two months since their last stand-up comedy show, the “Tomfoolery on Tremont” series will return with two shows – this Friday and Jan. 22 at the Renwick Mansion, 901 Tremont Ave., Davenport. 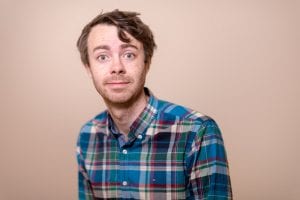 “They’re great comics, just not really big names,” Chris Schlichting of Davenport, comedian and organizer of the series, said recently. “We are just excited to get back to some comedy.”

The first show since Brett Terhune on Nov. 7, 2020 will be Geoffrey Asmus on Friday, Jan. 15 at 7 p.m. and 9:30 p.m., who Schlichting described as one of their favorites. (The 7 p.m. show is sold out and there are just a couple tables left for the second show, as of Tuesday morning.)

A Minnesota native who lives in New York City, Asmus won Comedy on State’s “Funniest Person in Madison 2015” and Penguin Comedy Club’s “Funniest Person in Iowa 2015.” He was selected as a “New Face” performer at Just For Laughs Montreal and was featured on FOX’s “Laughs” and Kevin Hart’s LOL Network.

Asmus has also performed at the Laughing Skull, Bridgetown, Limestone and Boston comedy festivals and won 3rd place in Atlanta’s 2017 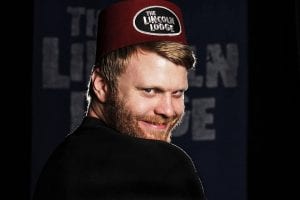 Scanlan (based in Chicago) is a cast member on the nation’s longest running independent comedy show, The Lincoln Lodge. He also runs a weekly show at the Comedy Bar and the Laugh Factory. He’s opened for Rory Scovel, Todd Barry, and Amy Schumer

He created and wrote for the satirical news website The Whiskey Journal and runs a podcast called Basketball Stories. For more information, visit http://kylescanlan.com/.

Jonathan Turner
Jonathan Turner has been covering the Quad-Cities arts scene for 25 years, first as a reporter with the Dispatch and Rock Island Argus, and then as a reporter with the Quad City Times. Jonathan is also an accomplished actor and musician who has been seen frequently on local theater stages, including the Bucktown Revue and Black Box Theatre.
See More Articles From Jonathan Turner
Tagged: Chris SchlichtingDavenportgeoffrey asmuskyle scanlanRenwick MansionTomfoolery on TremontTremont