Family fun and philanthropy were “in the bag” as Plumbers and Pipefitters Local Union 25 sponsored its third annual Veteran’s Bags Tournament in support of the Honor Flight of the Quad Cities. 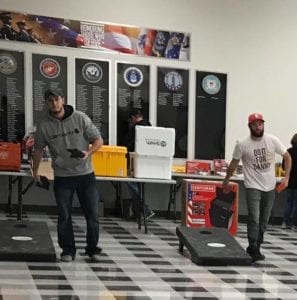 On Saturday, November 9, the union headquarters in Rock Island opened its doors to the community as people of all ages enjoyed the relaxed fun of the popular backyard picnic game of competing to toss beanbags into remote targets. In addition to the competition, there was food, drinks, games, a silent raffle, an online raffle and tickets for other prizes that spilled across three long tables. But the real reward was in the memories made with friends and family, funds raised for local veterans and the opportunity to send 1-2 Local Union 25 members along for the next Honor Flight.

Conducted by non-profit organizations and volunteers, the Honor Flight is dedicated to transporting as many United States military veterans as possible to Washington, D.C., to see the memorials of the respective wars they fought in — at no cost to the veterans.

It was a good time for a good cause and Local Union 25 officials were pleased with the response. 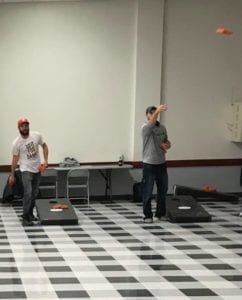 “It feels great to be involved,” said Wayne Corlett, a Navy veteran and member of the Local Union 25 Veterans Committee. “It’s great to have an event like this where we can raise money for fellow veterans.”

“Every year it gets better,” said Phil Davison, Local Union 25 business agent, Marine Corps veteran and event organizer. “It’s really satisfying to be able to help people and send some of our members on the Honor Flight. We help veterans that need assistance with the flight, and this helps out with the cost of that, and helps out other veterans’ charities. We’re always very grateful to everyone involved, and to all of our sponsors for helping out and donating to the cause.”

Sponsor Tim Hildebrant is also a union member, a Navy veteran and one of the members who acted as a guardian for the last flight — and he’s looking forward to more. 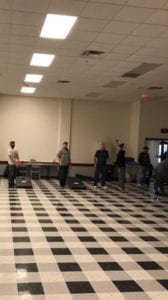 “It’s something that really makes an impact with you. It’s a great experience, and the look on the veterans’ faces really makes it all worth it,” he said. “They’ve given so much to our country, and to be able to give back to them is a special honor.”

“It was an honor and privilege to be a part of it,” added Chris Connell, a sponsor, Army veteran and union member who has also participated as an Honor Flight guardian. “Veterans helping veterans, that’s what we do.”

The union has a lengthy and rich history of supporting area veterans. From the United Association’s Veterans In Piping Program, which trains military service members with marketable skills in the trades by offering accelerated courses in HVACR and welding free of charge, to its active Veterans Committee, Local Union 25 has shown a robust dedication to those who have served our country.

Last year’s bags tournament raised $3,000, and this year’s event is poised to become the best yet based on preliminary numbers. 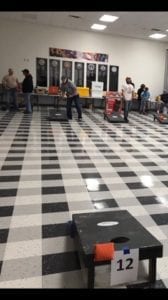 “We’ve got some really good big ticket items and should end up around or over $4,000,” said Chuck McKnight, Local Union 25 training coordinator and Marine Corps veteran. “It means a lot to us. A lot of guys in the union are veterans, and we try to give back to the community and veterans charities.”

A number of union members and their families volunteer their services and time to pitch in to make it happen. Local families and bags players were likewise happy to be a part of the upbeat event.

“It’s nice to come out and support a good cause and have some fun,” said Corey Catterton, a Local Union 25 member who was slinging bags with his friends. “It’s a cool way to spend an afternoon.”

“You can’t beat it,” said Jake Friichtenicht, who also participated with friends Drew and Mike West. “Good friends, good food, having fun to help out veterans — it’s all good.” 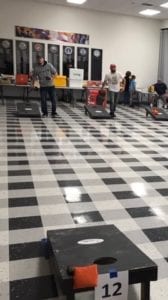 Sean Leary
Sean Leary is an author, director, artist, musician, producer and entrepreneur who has been writing professionally since debuting at age 11 in the pages of the Comics Buyers Guide. An honors graduate of the University of Southern California masters program, he has written over 50 books including the best-sellers The Arimathean, Every Number is Lucky to Someone and We Are All Characters.
See More Articles From Sean Leary
Tagged: charitiesfamily eventsHonor Flightlocal eventsLocal Union 25 Plumbers and PipefittersVeterans Day