BREAKING: Covid Mitigations Will Remain Throughout Illinois ‘For The Foreseeable Future,’ Pritzker Says

“We have got to take the time to evaluate any Thanksgiving effect before we make any premature adjustments,” Pritzker said. “I spoke with Dr. Fauci last week, and he said the massive number of indoor gatherings will likely bring another post-Thanksgiving surge, and this is no 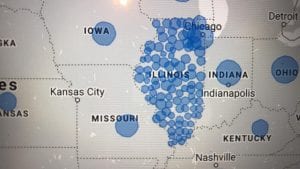 time to pull back on mitigations.”

Pritzker spoke to a number of other doctors and experts, and all agree the numbers could surge dramatically in the two weeks following Thanksgiving, due to the number of gatherings during the holiday weekend. He said his decision was squarely due to the unanimous opinion of the experts that another spike is coming.

“When the nations experts and state experts agree the virus may become more pervasive in the coming weeks, it’s time to listen to them, and I am,” Pritzker said. “That’s why I’m keeping all mitigations in place. The hope is that we can fend off the surge in the next few weeks so that we can get to a better time in late December. 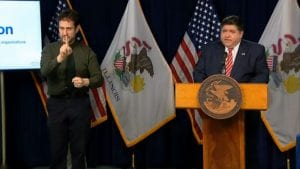 Illinois Governor JB Pritzker announced tier 3 mitigations will remain in place for the foreseeable future due to an expectation of spiking cases post-Thanksgiving.

“Our collective prayer is that everyone stays healthy and that the numbers continue their downward trajectory,” Pritzker added. “My hope is that the public joins us in making that prayer come true.”

There were 6,190 new positive cases in Illinois today, for a total of 726,304 since the pandemic began, according to Illinois Department of Health statistics. There were 85 deaths over the past 24 hours, adding to the total of 12,278 deaths since the beginning of the pandemic.

There are also currently 5,849 people in hospitals for covid statewide, with 1,271 in the ICU and 715 on ventilators, according to IDH statistics.

Yesterday, it was reported that the Quad-Cities has reached the “severe” covid outbreak level, according to the latest statistics from the Illinois and Iowa Departments

of Health and Covid Act Now, a not-for-profit national data aggregation website affiliated with the medical departments of Stanford, Harvard and Georgetown Universities.

Both Scott and Rock Island Counties have spiked up to the “severe outbreak” level, counting cases over the past few days, but NOT including outbreaks expected to bump up after last week’s Thanksgiving social activity trifecta of Black Out Wednesday, Thanksgiving Day Thursday and Black Friday.

All experts have agreed that cases will likely spike up this week as infections spread during those three days of increased socialization begin to manifest and infected people head to hospitals for testing and treatment.

As of Sunday, positivity rates were 22.4 in Rock Island County and 25.8 in Scott County, far above the rate of 12 percent positivity required to roll back Tier 3 mitigation actions put in place Nov. 20 by Illinois Governor JB Pritzker.

With covid-19 cases spiking throughout the state, Illinois Governor JB Pritzker put in place the new restrictions on Nov. 20, mentioning not just the rapid spread in terms of covid infections but their impact upon hospitals and people who may need the hospitals for other health emergencies.

“We’re trying to look ahead weeks so we don’t end up in a situation where hospital beds are over 100 percent filled by Christmas,” Pritzker said during his press conference to announce the restrictions. “Remember there are a lot of people who come to hospitals for non-covid-related medical needs, and we don’t want to get to the point where all the beds are full because of the spread of covid. If we continue at the pace we’re going, without any mitigation, that’s what’s going to happen.”

Iowa reported its highest death toll from covid over the past week, even after Governor Kim Reynolds had put in place additional mitigation procedures on Nov. 17.

Iowa covid-19 numbers are soaring to record rates, on pace for a “100 percent infection rate” for the state, according to numbers from the Iowa Department of Public Health, Centers for Disease Control and Prevention, and Covid Act Now, a not-for-profit data aggregation center affiliated with the medical departments of Harvard, Stanford and Georgetown Universities.