Connie Corcoran Wilson September 2nd, 2020 Local, Connie Wilson, Books Share:
A teenager who can see the worlds of demons and the paranormal around us that others cannot is the protagonist of Sean Leary’s critically-acclaimed graphic novel series, “Exorcising Ghosts” 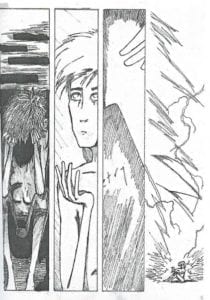 The book is available worldwide and in local bookstores. Leary wrote and illustrated the series when he was a teenager and the books seem ripped from the diary of a teen, featuring various perils of growing up, including family issues, relationship breakups, friend squabbles and more, but with an added twist. The anti-hero of the story, Colin Drewry, is a recovering alcoholic and addict who survived a suicide attempt to find that he could see a world of demons and paranormal beings hovering around us.
“Some of the elements of the story are autobiographical, the more mundane aspects, actually, and the others, the more fantastic elements, are all born of my imagination,” Leary said. “When I was about 15, I got the idea, what if someone returned and was able to see that our addictions and difficulties in life, those negative voices in our head, were actually demons around us trying to get us to do these negative things in order to generate more energy for them to exist in this plane? I took that idea and went from there and it ended up being a pretty cool concept and story.”

Exorcising Ghosts was originally published as part of the comic book anthology Equinox when Leary was a teen, working with such future luminaries as Erik Larsen and others. It was hailed by critics at the time as revolutionary and shockingly raw and revelatory. Tableaux Magazine said “It’s Emo before Emo became a thing, all full of teen angst and gothic and supernatural thrills.”
“It was included in some anthologies with Erik and some of the other up-and-coming creators of the times, guys who went on to work at Image, Marvel and DC,” Leary said. “We were all in our teens and twenties at the time and all just coming up in the business. I ended up going into journalism, they ended up going into comics, although I still have my comics work I did at the time and it’s fun to look back upon. I had a great time doing it and working with them.”
The five-issue story arc was originally republished as a book, Exorcising Ghosts, in 2004, and last year was reprinted as five individual graphic novels to represent each issue of the arc. The books are “Dark Equinox,” “The Ink In The Well,” “Dream States,” “Valentine Cords” and “Spyder.” 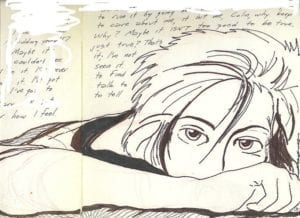 “I’m really happy with it, I think it still holds up,” Leary said. “The adolescent problems I faced aren’t much different from those now, and I think the paranormal aspects are really fun and imaginative. It’s been interesting to me to see shows and movies like Buffy the Vampire Slayer and Twilight take the same path, using the same metaphor of the supernatural within a coming-of-age story about adolescence that I used in the novels. And I think fans of those things, and others like it, will really enjoy the Exorcising Ghosts series.”
For more information and future signings see SeanLeary.Com – and Leary’s facebook page at seanleary007.
Advertisement
Connie Corcoran Wilson
Connie (Corcoran) Wilson (www.ConnieCWilson.com) was the Quad City Times film and book critic for 15 years and has continued reviewing film uninterruptedly since 1970. She also publishes books (31 at last count) in a variety of genres (www.quadcitieslearning.com), has taught writing or literature classes at every Quad City college or university as adjunct faculty, was Yahoo's Content Producer of the Year for Politics  and writes on a variety of topics at her own blog, www.WeeklyWilson.com.
See More Articles From Connie Corcoran Wilson
Tagged: area book signingsCaribou coffeeExorcising Ghostsgraphic novelslocal authorsSean Leary