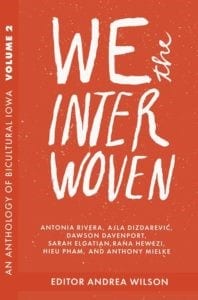 Read Local, a program partnership between the Bettendorf Public Library and the Midwest Writing Center that spotlights local authors six times a year, returns to BPL in December for a special year-end event.

Sarah Elgatian, Davenport native and contributor to WE THE INTERWOVEN, VOLUME 2 (published by the Iowa Writers House in 2019) will be joined by fellow INTERWOVEN contributors Dawson Davenport, a Meskwaki member, and Rana Hewezi.

Following the reading, there will be a question and answer opportunity, and copies of the anthology will be available for purchase. The event is free and open to the public.

WE THE INTERWOVEN, VOLUME 2, introduces seven new voices—three fellows and four honorable mentions, all with stories that explore the theme of living between two worlds. Antonia Rivera crossed the Mexican-American border at the age of six, and her story spans three decades of the undocumented immigrant struggle. Dawson Davenport, a member of the Meskwaki Nation, shares a story of inherited Native trauma manifesting in the life of a young man coming of age. Ajla Dizdarević shares a Bosnian-American story of cultural tradition that survived a family’s migration. Hieu Pham explores Vietnamese-American filial debt, Rana Hewezi writes of an Egyptian mother’s gift to her daughter, Sarah Elgatian remembers her Armenian grandmother, and Anthony Mielke discovers his hidden Puerto Rican heritage. These seven stories take us on a ride through the heart and the moral conscience as they explore how we find identity and make a future in an America that is still deciding its own.

Dawson Davenport is a member of the Meskwaki Nation and grew up on the Settlement near Tama, Iowa, where he was raised by his maternal grandparents. He tells stories about his experiences as a Native, both the challenges he has faced and the Meskwaki way of life. He graduated from the University of Iowa with a degree in art and a certificate in entrepreneurial management. He spends his time in Iowa City and the Meskwaki Settlement as an entrepreneur, doing graphic design, running his clothing brand called Daepian Apparel, and opening a Native arts gallery in Iowa City.

Sarah Elgatian is a second generation Armenian-American with a lot of questions and writes lyric essays in order to grapple with them. She believes in long sentences, bright colors, dark coffee, and wicked clowns. Among other places, her work has been featured in We The Interwoven, CrabFat, and Beholder Magazine.

Rana Hewezi was born in Cairo, Egypt. When she was two, her family moved to France, and when she was seven, they moved to Ames, Iowa. She writes lyrical nonfiction that confronts and resists the oppression, fear, and ignorance of society. Many of her stories are centered around familial expectations and her culture. She has been published literary magazines such as Earthwords and Teen Ink Magazine, and she is a winner of the Iowa Chapbook Prize. She currently attends the University of Iowa studying philosophy and English, and she hopes to go to medical school after graduation.

Sean Leary
Sean Leary is an author, director, artist, musician, producer and entrepreneur who has been writing professionally since debuting at age 11 in the pages of the Comics Buyers Guide. An honors graduate of the University of Southern California masters program, he has written over 50 books including the best-sellers The Arimathean, Every Number is Lucky to Someone and We Are All Characters.
See More Articles From Sean Leary
Tagged: Bettendorf Public LibraryDawson Davenportlocal literary eventsRana HeweziRead LocalSarah ElgatianWe The Interwoven