The Augustana College Department of Theatre Arts will present “One Flea Spare,” directed by Jennifer Popple, Thursday through Sunday, May 6 to 9, at Brunner Theatre Center, 3750 7th Ave., Rock Island. 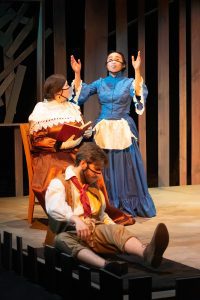 Darkly comic and deeply moving by turns, “One Flea Spare” is set in plague-ravaged 17th-century London, where social roles and the boundaries that describe them have turned upside down. The definition of morality is up for grabs.

Upper and lower class are forced to live in quarantine together and the secrets and sins of the four shut-ins are laid bare. The social hierarchy collapses, and inhibitions are loosened as the prisoners wait for death to strike them down or pass them by, according to an Augustana synopsis.

“Although it has instances of tragedy and even horror in it, as our previous year has, there are also moments of connection, an appreciation for the little moments, and a reliance on friends and family, which I know we all understand more than when Wallace’s play was first produced in the 1990s,” Popple said of the 1995 play by Naomi Wallace.

The work (whose title is based on a John Donne poem) opened in New York at The Public Theater in 1997 and won the OBIE Award for best play; it also won the 1996 Susan Smith Blackburn Prize, the 1996 Joseph Kesselring Prize and the 1996 Fellowship of Southern Writers Drama Award.

Playwright Tony Kushner (“Angels in America,” “Caroline, or Change”) has written of “One Flea Spare”: 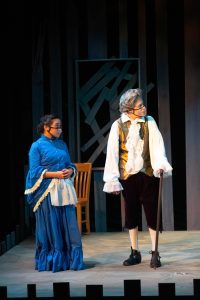 “‘Almost’ inexpressible except in the hands of a true poet, and Naomi Wallace so magnificently proves herself to be. Her ability to articulate the inarticulable, grief and loss and suffering beyond endurance, is a source of hope; as is the resilience and passion of the marvelous characters she’s assembled.

“Everyone who loves the theater should read this play. It has made me INTENSELY envious and very full of joy,” Kushner wrote.

John Lahr of The New Yorker wrote that the play “is built to provoke, not to distract, and it doesn’t surrender its meanings easily. But the play’s powerful sexual subtext and its beautiful poetic surface reveal an original theatrical imagination. Whether Wallace will find a big audience remains to be seen. She has a big talent, though. Wherever her plays are mounted, they’re worth finding.”

At Augustana, audience sizes will be limited in order to accommodate for social distancing. Purchasing your tickets in advance is highly recommended. Masks are required for all patrons.

Performances will all take place at the Brunner Theatre Main Stage – 7:30 p.m. Thursday, Friday and Saturday, and 1:30 p.m. Sunday. Tickets ($15 for general public, $12 for senior citizens, and $7 for students and Augie faculty/staff) can be ordered at www.augustana.edu/tickets.

For additional information, contact the Ticket Office at tickets@augustana.edu or 309-794-7306.

Jonathan Turner
Jonathan Turner has been covering the Quad-Cities arts scene for 25 years, first as a reporter with the Dispatch and Rock Island Argus, and then as a reporter with the Quad City Times. Jonathan is also an accomplished actor and musician who has been seen frequently on local theater stages, including the Bucktown Revue and Black Box Theatre.
See More Articles From Jonathan Turner
Tagged: Augustana Collegeaugustana college department of theatre artsaugustana college theaterBrunner Theaterjennifer poppleone flea spareQuadCities theater