One of the main reasons I love the Quad-Cities (and have made it my home since fall 1995) is because of its outstanding, vibrant and growing arts scene – more than a dozen theater companies, a world-class symphony orchestra, exquisite professional ballet, top-quality art museum, a Smithsonian-affiliate museum of natural history and science, many live music venues of all sizes, gorgeous art galleries, a breathtaking botanical center and gardens, a variety of other fascinating museums, and on and on.

A band playing at East Moline‘s Rust Belt is featured in the new QC promo video.

But unfortunately, very little (and I mean very) of that comes through in the new, whiplash-inducing promotional video unveiled Thursday, Oct. 28 as part of new collaborative QC branding campaign from the Quad Cities Chamber and Visit Quad Cities. I greatly admire the intent and execution behind the colorful, confident effort – which has many authoritative answers to the oft-asked query, “QC, That’s Where?” 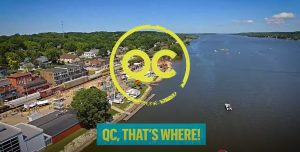 A new 90-second video showing off the QC was produced by the global consulting firm Resonance.

“QC, That’s Where!” is designed to put the region firmly on the map. According to the two civic cheerleading organizations, it confronts where the QC is head-on with humor and facts that cut through the clutter and get the attention of potential visitors, investors, and residents, according to the local organizations, noting it focuses on our family of communities as home to downtown riverfronts and down-to-earth, skilled people, home-grown startups and global headquarters.

“Driving a unified and all-encompassing brand messaging strategy that focuses on identity, perception, and position is vitally important to the Quad Cities future,” said Dave Herrell, VQC president and CEO. “On behalf of our Board of Directors and team, we are thrilled about the direction of the QC, That’s Where! campaign and how it will collectively move us forward as we compete for economic recovery and resurgence.  We are grateful for the collaboration and teamwork by many civic leaders and community stakeholders that have been involved with this process and initiative.” 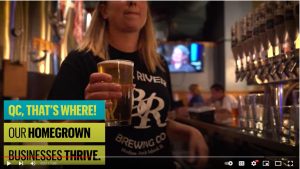 Bent River Brewing Company is featured in the new “QC, That’s Where!” video.

“QC, That’s Where! will drive the Chamber’s marketing efforts to grow the Quad Cities’ economy and population,” said Chamber president/CEO Paul Rumler. “This brand will enable the Chamber and Visit Quad Cities to share a consistent message to businesses, visitors, residents, and potential newcomers about why QC is where they should be.”

By holding Thursday’s media event in the 16-year-old Figge Art Museum, with a talented artist (Atlanta Dawn of Silvis) painting a QC scene in the lobby, there clearly was an emphasis on how important the arts are to our community’s success and well-being.

And speaking afterward with Diana Carr, vice president of storytelling for Resonance Consultancy (which led the new promo campaign), it was obvious she shares my passion for how impressive the area’s cultural offerings are, especially for a region of this size (about 470,000 population in the six-county area).

Resonance Consultancy is a leading advisor in tourism, place strategy and branding, economic and real estate development, to develop the new brand. The campaign was chosen following development of a QC tourism master plan, extensive stakeholder engagement within the communities, and a robust economic development analysis that outlined the region’s challenges and opportunities. 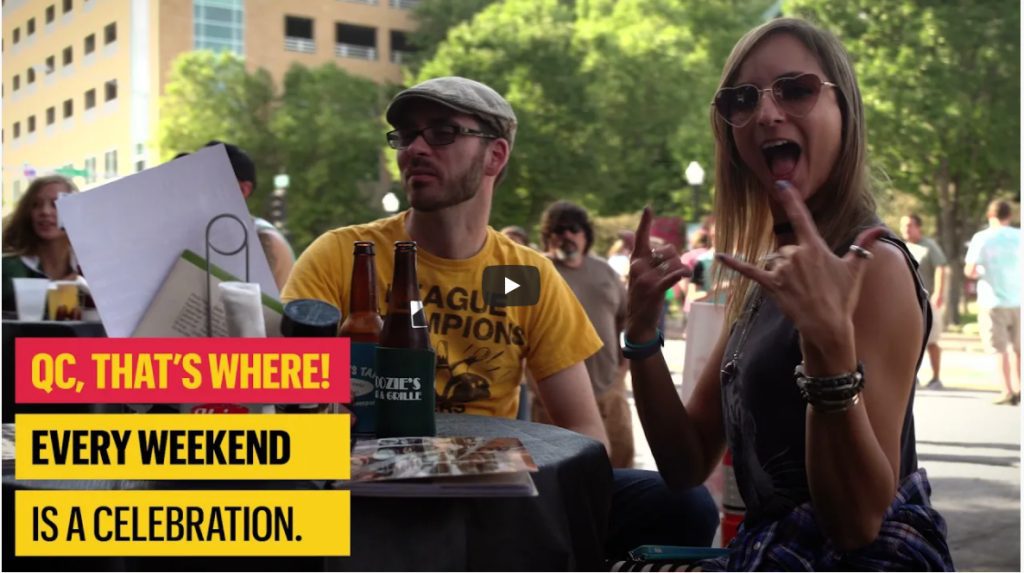 From that research, Resonance tested three campaigns through local focus groups and online surveys to gather opinions on which campaign resonated for the region. For some unknown reason, they didn’t seek out my “expert opinions,” after having covered the region and its arts activity for 26 years. 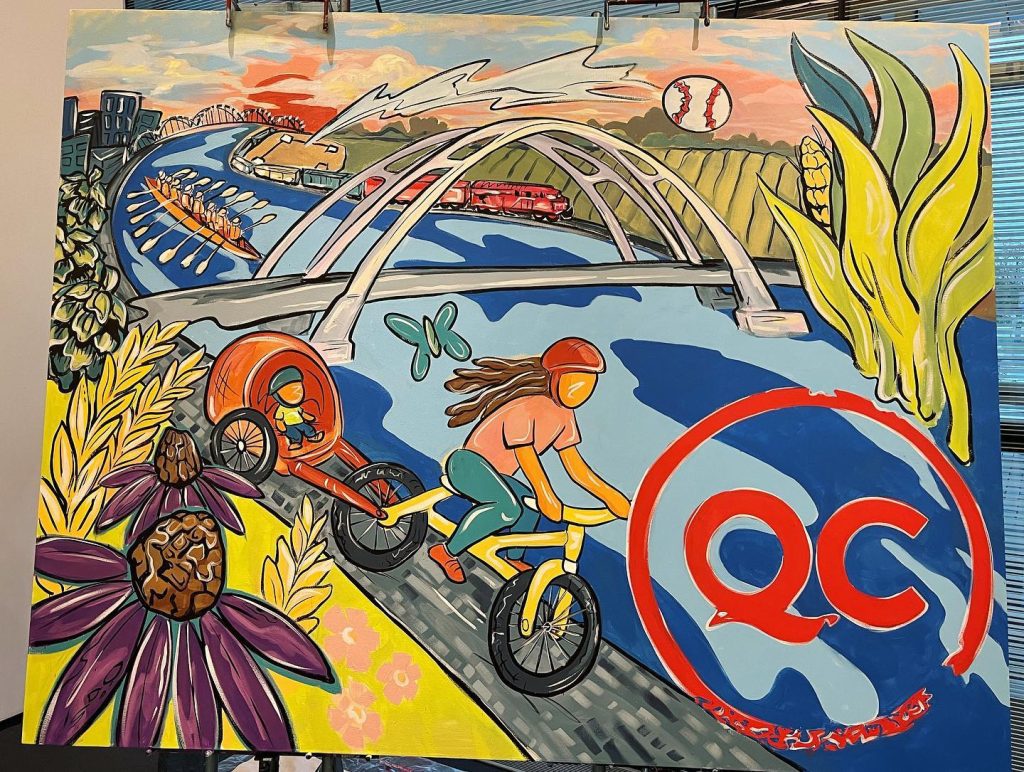 On the new website, QCthatswhere.com, the narrative does helpfully place culture at the center of what makes this a wonderful place to live, work and play.

“We love our Upper Midwest Mississippi River destination, are proud to call the QC home, and take great pride in sharing our story with the world.  Whether it’s watching a sunset with a drink in hand from a rooftop bar or taking in the culture that makes up the Quad Cities at year-round festivals and events, taking a bike ride along the river, hiking through woodland settings, or kayaking along our currents, the QC is full of surprises,” the site says.

But in a rapid-fire 90-second video on the site, you get the impression we are very active here in the QC, love the outdoors, our special events and festivals, and certainly love our beer. I counted at least nine clips where people are serving or enjoying the intoxicating beverage. Aside from briefly showcasing our own Bent River Brewing Co., these scenes could be from anywhere in the world. And other than some beautiful scenes along the Mississippi, all the activities shown in the video also could be taking place in any other major city in the U.S. A group playing bags? That is so uniquely QC!!!

Herrell from Visit Quad Cities and Rumler of the Chamber rightly note that we have to tell and sell a uniquely QC story, especially in today’s fast-paced world, where every city is competing every day against each other for valuable attention, and the invaluable time and treasure of potential employers and residents. What makes the QC so special, more than Shanghai, San Francisco, Nashville or Amsterdam? 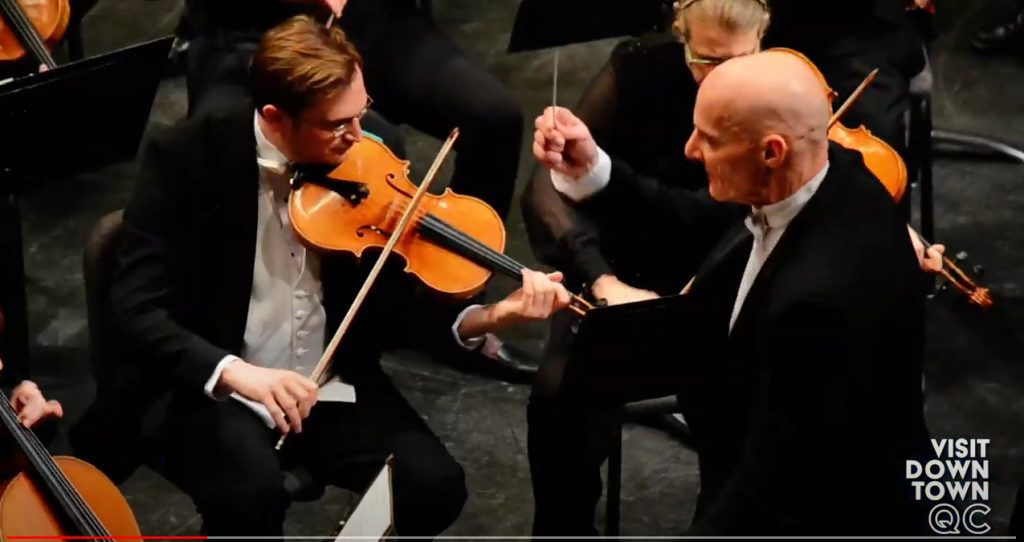 Don’t get me wrong, the QC, That’s Where! “sizzle reel” (locally produced, with the help of Rock Island-based dphilms) is incredibly uplifting and exhilarating, with a few one-second views of outdoor bands, and one at East Moline’s Rust Belt. But upon repeated viewings, I saw no references to the Quad City Symphony, the Figge, Ballet Quad Cities, the Putnam, Niabi Zoo, QC Botanical Center, River Music Experience, Adler or TaxSlayer Center, Circa ’21 or any other single theater company. But beer? That is so very unique to the QC, apparently. 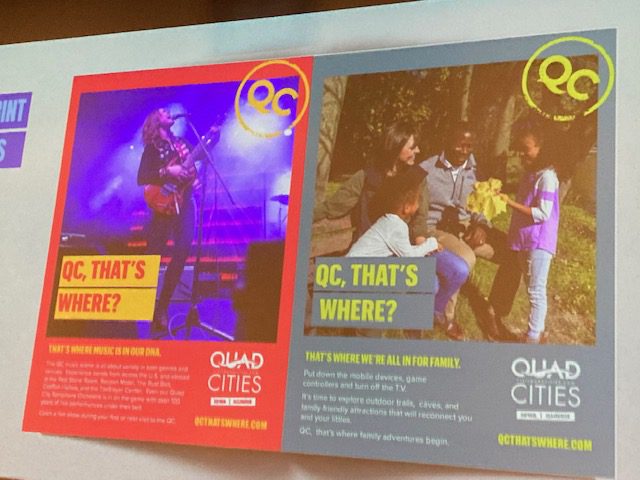 A sample new ad features some of the QC music scene.

I know Visit Quad Cities and the Chamber have long been champions for arts and culture in the area. They obviously are critical to a strong tourism industry and diversified local economy. According to a VQC 2020 video (more relaxed and comprehensive at 2 minutes, 22 seconds), in pre-Covid times, the area attracted 2 million visitors a year, supported 8,240 tourism and hospitality jobs, and generated $930 million in local economic impact. The Chamber downtown directors – Kyle Carter (Davenport), Ryan Jantzi (Bettendorf) and Jack Cullen (Rock Island) – along with Moline Centre chief Geoff Manis, all know how very vital a growing cultural environment is to our quality life, and our ability to attract and retain jobs and residents.

Quadcitieschamber.com says each downtown has its unique personality and strengths. “We want 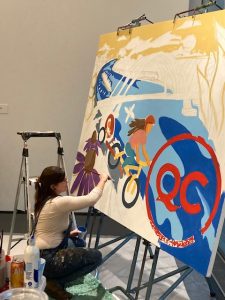 Artist Atlanta Dawn of Silvis painted in the lobby of the Figge Art Museum during the Oct. 28 event to unveil the new QC brand.

the Quad Cities to be a place where people are excited to invest their lives. Supporting vibrant downtowns and creating cool places are key elements to attracting and retaining talent. Our downtowns are the heart and soul of our region and the river is our connector. The Quad Cities Chamber partners with many of the downtown districts and local economic development organizations throughout the region to facilitate collaboration, as well as balance economic growth and the overall well being of the Quad Cities.”

One Visit Quad Cities video that does briefly show the QC Symphony is one on our downtowns, found on the Chamber website.

“Why does it matter that the Quad Cities has a vibrant arts and culture scene?” Maynard asked. “It’s not just because I think the arts have the power to save the world, which I do. It’s because whether you realize it or not, the arts are touching every aspect of your life and our community. The arts will lead us to an economic recovery.” 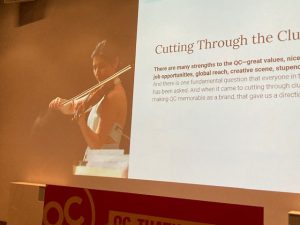 QCSO concertmaster Naha Greenholtz was pictured in part of the presentation from Resonance for the “QC, That’s Where!” campaign.

Students involved in the arts lead to higher college graduation rates, SAT scores, and more civic-minded young adults, he noted. “The arts are important; the arts are a powerful tool in and out of school.” Exposure to arts has shown to increase empathy, understanding and acceptance of other cultures, and to reduce stress, Maynard said. Among older adults, the arts decrease depression and the risk of dementia, he said.

In the U.S., the arts generate 4.2 percent of annual GDP, or $736 billion, and employ over 4.9 million people — a larger share than construction or farming. While it will take a while for the sector to rebound from Covid, “it will rebound,” Maynard said.

Locally, nonprofit arts organizations have an economic impact of over $71 million a year (according to 2015 data), outpacing sports in our region, he said, noting updated numbers will soon be compiled. Many times, however, I get the distinct impression that many people value sports here much more than arts and entertainment. 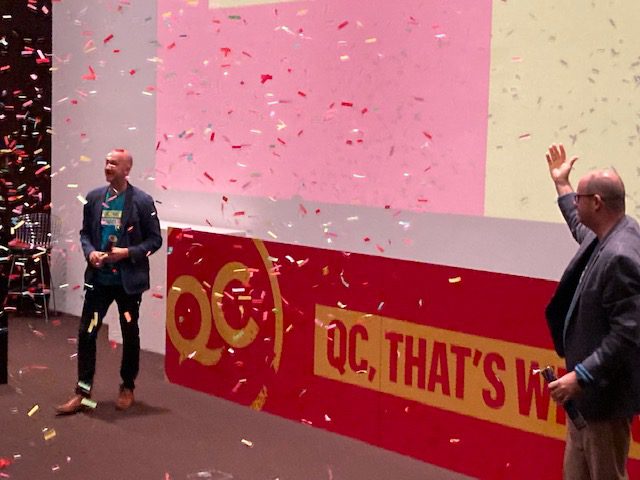 Both obviously have their place, but those singing the praises of the QC should never forget how great the fine arts are, and the mind-boggling number of hard-working, super dedicated, gifted artists and performers we have in the area. If we don’t support them and show off their artistry to the wider world, they may soon pack up for a town that does.

Where do the arts really matter? The QC, that’s where.

Jonathan Turner
Jonathan Turner has been covering the Quad-Cities arts scene for 25 years, first as a reporter with the Dispatch and Rock Island Argus, and then as a reporter with the Quad City Times. Jonathan is also an accomplished actor and musician who has been seen frequently on local theater stages, including the Bucktown Revue and Black Box Theatre.
See More Articles From Jonathan Turner
Tagged: artsBent River Brewing Co.Figge Art MuseummuseumsQCqc chamberQuad CitiesResonance ConsultancyThat’s WheretheatreTourismUpper Midwest Mississippi Rivervisit quad cities