The Art Legacy League (ALL) has found a new home on the Davenport riverfront and will hold a two-hour open house on Friday, Nov. 20.

Founded in 2012, the nonprofit ALL is dedicated to the memory of Father Edward Catich and his contributions to the calligraphic arts, history of writing, and his long legacy of teaching. Father Catich (1906-1979) was an internationally renowned artist, calligrapher and visionary instructor who founded the St. Ambrose University Art Department. 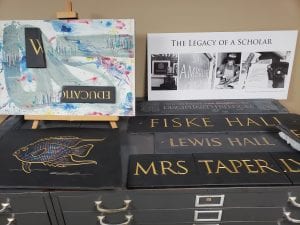 Samples of art at the new Art Legacy League classroom in Davenport.

The ALL moved from J.B. Young Opportunity Center, 1702 N. Main St., Davenport. It had been there since 2018, and is now at the historic One River Place, 1225 E. River Drive, Davenport, said board chairman Paul Herrera, who studied with Catich. The move from J.B. Young was necessary after coronavirus struck early this year.

“We were one of the first organizations in there; we were perfectly happy,” Herrera said recently. “We had a nice spot, they were very cordial and provided us what we needed. What happened was Covid, basically. What they had to do was to close down the schools and J.B. Young Center, just a total lockout.

“We understand, but it lasted for so long, as the time came to renew our lease, we knew that with rumors of a second surge of Covid, we would probably get locked out again,” he said.

“So basically, our classes were cut short because of lockout and thought we just can’t risk losing out on another three or four months, or who knows how long, of trying to raise funds and hold classes. So that was our motivation for finding another venue,” Herrera said.

There was supposed to be a Catich exhibit over June at the Bereskin Gallery in Bettendorf, but they couldn’t get pieces out of J.B. Young, so 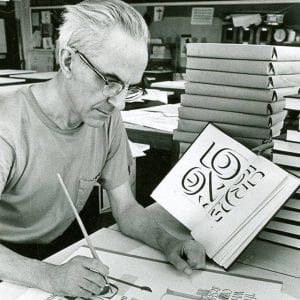 Catich was a professional Chicago sign writer, painter and jazz musician before he entered the seminary for ordination as a Roman Catholic priest.

Herrera displayed his own works.

Artist Amy Nielsen – who teaches with Art Legacy League — knew the One River Place owner Molly Arp Newell, so that clicked, he said. They have more space now than at J.B. Young, and will hold off on holding classes until after Jan. 1.

“Here at One River Place, we can have a Saturday, Sunday workshop.”

The open house will be Friday from 3 p.m. to 5 p.m. and they’re going to limit the number of people through the rooms at once. Herrera said there will be three different stations for the open house – one at the building entrance for a ribbon-cutting; the ALL classroom on the second floor, and on the third floor in Room 325. There will be directional signs for visitors. The third floor space available that day will offer works for sale.

A ribbon-cutting will be held with Quad Cities Chamber Ambassadors at 4 p.m. at the building entrance. Suite #201 will be open to the public, 10-15 people at a time, masks required, for a 10-minute overview, with examples of fine art being made.

Suite #325 will serve as a gallery Friday of selected works completed, with a docent to share short stories and answer questions. There also will be a raffle and swag bags with surprises will be given out. 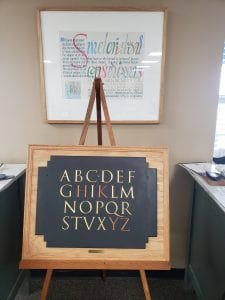 “The Art Legacy League is a great asset to our community,” said Molly Newell, owner of One River Place. “Other small businesses at One River Place are excited to view the fabulous variety of art now staged in the lobbies and corridors.

“We all look forward to opportunities to engage in art classes like drawing, calligraphy, painting and art history,” she said. “We are blessed to have the proteges of the world-renown educator, calligrapher and artist, Father Edward Catich, in our building. People travel from around the world to view originals of Catich’s work and to take instruction from the masters in our midst.” 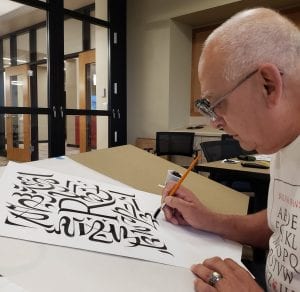 Paul Herrera is board chairman of the Art Legacy League.

The open house will feature an exhibit of calligraphy, watercolor, and religious artwork by Father Catich. Visitors can enjoy demonstrations of calligraphy and drawing while partaking of food and refreshments.

The classroom/gallery/archive will be open throughout the year, featuring etchings in slate, marble sculptures, watercolors, oil painting, drawing, and other media.  Also, they will still offer the same variety and quality of art classes as before, with adjustments being made for social distancing.

Original artworks by Father Catich will always be on display at the new location. They still have a large selection of giclee (“gee-clay”) reproductions of his work and Catich designed holy cards for sale. Revenue from these items helps ALL to continue the tradition of carrying on the Catich legacy of art instruction.

A Montana native, Catich attended the Art Institute of Chicago for two and a half years, and graduated from Davenport’s St. Ambrose College (now university) in 1934. 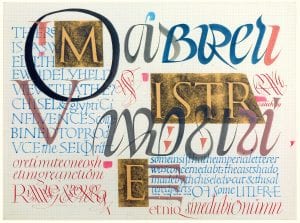 Artwork at the new Art Legacy League in Davenport.

He was a professional Chicago sign writer, painter and jazz musician before he entered the seminary for ordination as a Roman Catholic priest. His brush writing (sign painting) and trumpet-playing skills were honed while he was a resident at Mooseheart Orphanage/Academy in Aurora, Ill., according to ALL.

He earned his master’s in art from the University of Iowa in 1935 and was awarded a four-year scholarship to the Pontifical Gregorian University in Rome, Italy, by the Diocese of Davenport that same year, according to his bio at artlegacyleague.org.

Father Catich was ordained in 1938, and returned to SAU in 1939. He taught art, math, engineering, and music while establishing and expanding the art department. He published several books with his own Catfish Press, which he operated from his studio.

Catich was president of the Catholic Art Association; staff consultant for Encyclopaedia Britannica, where he designed the encyclopedia’s corporate identity symbol and bicentennial medal, and was consultant for several nationally known architectural firms, his bio says. 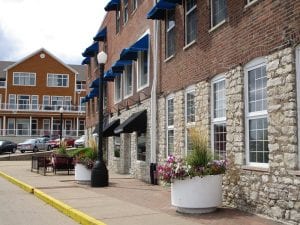 The One River Place building on East River Drive in Davenport. 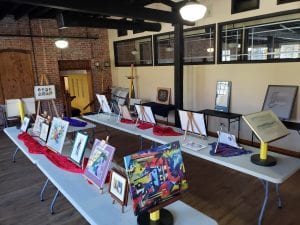 Suite 325 in One River Place has ALL artwork, prints and cards for sale.

Britannica’s corporate headquarters, the Los Angeles County Museum of Art, Reed College, the Morton Arboretum, Harvard University, and the library at the University of Pittsburgh’s School of Engineering.

Father Catich is known as an author, stonecutter, calligrapher, photographer, musician, liturgical artist, historian and lecturer, his bio says. He taught at St. Ambrose for more than 40 years.

He also taught art at the Davenport Municipal Art Gallery an equal number of years and offered calligraphy workshops across the country.

Among his many awards and achievements, perhaps the best known was the Frederic W. Goudy Award which he received in 1976. Father Catich died on April 14, 1979.

He remains the leading authority of the Imperial Roman letter as found at the Trajan Column in Rome, Italy. The Trajan Inscription has been generally regarded by paleographers, calligraphers and others interested in the letter arts as the finest example of the best period of Roman monumental lettering, according to artlegacyleague.org. It is accepted as the basic model of the Roman alphabet. 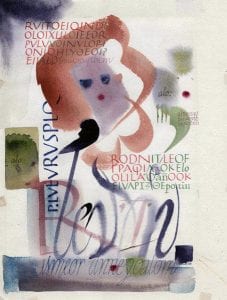 Until Father Catich, the majority of the studies made of this inscription were not based on the original stone, but on reproductions of it which were in many ways misleading.

He began his intensive paleographic and epigraphic research throughout Europe and the Middle East in 1935 as he studied for the priesthood in Rome. After his ordination in December 1938, he returned innumerable times over the course of his life to gather facts which he published in two major works – “Letters Redrawn from the Trajan Inscription” (1961) and “Origin of the Serif” (1968). Both books were 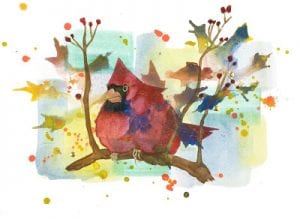 A cardinal painted by Amy Nielsen, who teaches for ALL.

published by his own Catfish Press at St. Ambrose.

Father Catich did more than just write about the letters on the Trajan Inscription;  he made an actual full-sized cast directly from the monument itself. A feat that will, most likely, never be repeated.

“I may be a bit biased, however, when considering local heroes, Catich is bigger than Bix,” ALL board member George Rashid said recently, “although Bix was a gifted musician and continues to live on through his music, as does Catich through his artwork. That’s what artists do, they leave a legacy.”

Mixing art with history on river

The historic One River Place building at 1225 E. River Drive is slightly east of the old Hostess Bakery on what was once referred to as Twinkie Boulevard. 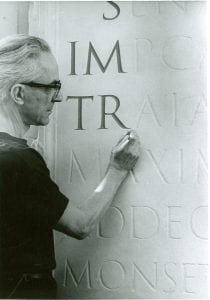 One River Place is on the National Register of Historic Places and was constructed in the 1860s as Shield’s Woolen Mill. It was later a carpentry shop, a furniture manufacturer and casket manufacturer through the depression of the 1930s. The building has a rich history of tenants and caretakers including architectural engineering firms, advertising agencies, art galleries, a health spa, barber shop, environmental consultants, realty firms, and international import/export brokers.

Building owner Molly Arp Newel, is founder and president of EnviroNET – which works to solve engineering and environmental problems specific to real estate revitalization, landfill monitoring and other issues. One River Place has 20 tenants, and the building has five suites available for lease.

The Art Legacy League is all volunteer, and is looking to raise money for new supplies to teach more classes, Herrera said.

“We have to get acid-free matting; we need acid-free matte board,” he said as an example. “Being students of his, we want to take proper care.”

Jonathan Turner
Jonathan Turner has been covering the Quad-Cities arts scene for 25 years, first as a reporter with the Dispatch and Rock Island Argus, and then as a reporter with the Quad City Times. Jonathan is also an accomplished actor and musician who has been seen frequently on local theater stages, including the Bucktown Revue and Black Box Theatre.
See More Articles From Jonathan Turner
Tagged: amy neilsenartart galleriesbereskin gallerycatichj.b. youngmolly arp newellone river placequad cities chamber ambassadorsquadcities art galleriesquadcities art scenequadcities artistsSt. Ambrose