Amy Hessel grew up in an athletic family where the fires of sport, camaraderie and competition forged lifelong bonds, and she still helps create those relationships as the character development coordinator for the Muscatine YMCA.

The oldest of four children born and raised in Waukon, Iowa, her father was an avid athlete and his children followed in his stead, including 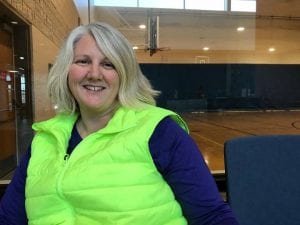 “It was instilled in us that sports was important, and it really was to me, it’s what helped me get through high school,” Hessel said. “Which is why it’s so important to me to help people now find their way through sports and athletics.”

However, Hessel did have some odd detours and experiences due to her athletic participation.

“The most interesting was basketball, because we played before they changed the rules for girls’ basketball, so we were playing on a half court, six-on-six, and you could only dribble twice before you had to pass or shoot,” Hessel said with a laugh. “They changed the rules to normal basketball my senior year and I had the hardest time adjusting because I didn’t know what to do!”

She caught on quickly, and continued her love of sport through getting a B.A. in English Writing at Loras College, where she met her husband, Chad, who was a lifelong Muscatine resident, and led the couple back home after they graduated. They’ve since had two children, Alex, 17, and Jackson, 14, and moved to Davenport with her husband’s job transfer, but for the last 18 years, Hessel has remained in her favorite spot at the Muscatine YMCA.

“I really do love this job, I think it’s really important and I feel like I’m making a difference in people’s lives,” Hessel said. “Whether it’s sports or music of a club, kids and adults need to have something that keeps them going every day and that helps them feel like they’re part of something, that they have friends and people that they can interact with and something that’s important to them and that they can have fun doing. It’s like a family here.”

That hits home for her, she says, because of two profound losses that have shaped Hessel as a person and in her current job. At age five, her mother passed away, followed by her stepmother when Amy was in college.

“Sports was really a refuge for me, and I see that with other people too,” she said. “It was important for me to have that outlet and find my 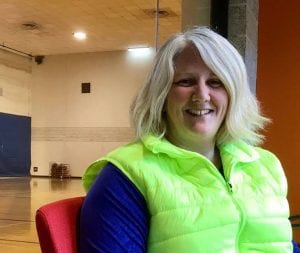 place in the world and be a part of a group that I felt at home in, and I see that here, that’s really a big thing for me to be a part of helping other people find that.”

One of Hessel’s greatest joys outside of work is spending time with her family, hiking or playing sports, especially soccer, which is huge with her sons and with her and her husband, who play in recreational leagues. She also loves going to trivia nights and seeing live music with friends.

“I just love to see my kids doing things, you’ll always find me on the weekends at a soccer game or something, and that’s the best,” Hessel said. “I love it.”

That sense of bonding and community through athletics permeates her life in and out of her job, she said, and it’s something that always has and likely always will.

“Every day I just feel really blessed to see kids really enjoying something they’re doing, when you see them being challenged and completing something and they get to have those wonderful moments, it’s really the best thing,” Hessel said. “And when you see adults come in and join their friends and form these great bonds and friendships with each other. It really is like a family here. And that’s one of the things I love, is that the Y really is for everyone and it’s a place that everyone can go to find something and be a part of a family.”

Sean Leary
Sean Leary is an author, director, artist, musician, producer and entrepreneur who has been writing professionally since debuting at age 11 in the pages of the Comics Buyers Guide. An honors graduate of the University of Southern California masters program, he has written over 50 books including the best-sellers The Arimathean, Every Number is Lucky to Someone and We Are All Characters.
See More Articles From Sean Leary
Tagged: amy hesselMuscatinemuscatine ymcaYMCA