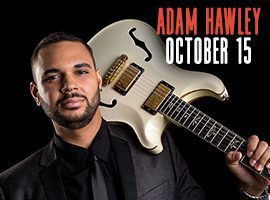 Seven #1 hits. 50+ dates per year. Adam’s first two albums stormed up the charts in unprecedented fashion setting the stage for his third release, “Escape.” The album features guest appearances by Najee, Rick Braun, Michael Lington, Marcus Anderson, Jeff Ryan and Kat Hawley.
Adam signed with Kalimba Music (founded by Maurice White of Earth, Wind, & Fire) in August 2015. His first offering on the Kalimba label features Brian Culbertson, Gerald Albright, Euge Groove, Eric Darius and Michael Lington. And in 2016, Adam was been named both Smooth Jazz News and JazzTrax Debut Artist of the Year.
Adam has also been a guitarist to the stars, appearing with a who’s who list of artists in a wide variety of genres. Credits include Dave Koz, Jennifer Lopez, Brian Culbertson, Natalie Cole, Brian McKnight, and American Idol to name just a few.
He holds a Doctorate of Musical Arts from the University of Southern California and currently teaches at Musician’s Institute, Chaffey College, and Saddleback College.
Get your tickets now at https://www.eventbrite.com/e/167094597439
Advertisement

Sean Leary
Sean Leary is an author, director, artist, musician, producer and entrepreneur who has been writing professionally since debuting at age 11 in the pages of the Comics Buyers Guide. An honors graduate of the University of Southern California masters program, he has written over 50 books including the best-sellers The Arimathean, Every Number is Lucky to Someone and We Are All Characters.
See More Articles From Sean Leary
Tagged: adam hawleyRedstone RoomRiver Music Experience