Home › Columns › Sean Leary › A Look Back At A Weekend That Lives In Quad-Cities Infamy: PickleWars 2021

A Look Back At A Weekend That Lives In Quad-Cities Infamy: PickleWars 2021

“What’s all this pickle stuff?”

Someone had the gall to ask me this yesterday.

“All this pickle wrap stuff… what is it? Why is everyone posting about it? I don’t know what they’re talking about.”

That’s a tragedy, folks. A real tragedy. An absolute shame that someone should be so ignorant and ill-informed on something so vital and important to our local well-being and civil moral and social fabric.

But being a responsible journalist, I felt I needed to educate this person. And so, too, any of you who might be wondering what exactly has been going on with all of this pickle pugnaciousness over the past sour seven days.

A local restauranteur, claiming to be the inventor of the pickle wrap, and igniting the brine of an entire four cities. Five if you count Milan.

It was a weekend that will live on, in infamy. That changed the Quad-Cities forever. That inspired a thousand memes, about 999 of which can be seen on this website, here, and also here. And one that should never be forgotten. And so, ipso facto, we at QuadCities.com are proud to present, this Very Special Historical Document. A dramatic reading of local history. The one. The only. PickleWars 2021.

It all began with a post. A Very Special Post. By the owner of a local deli, Cafe Fresh. The post, which was accompanied by a photo of pickle wraps from a competing restaurant, Meatball’s Sandwich Company, read thusly:

“When you see these pickles, ask yourself, does something look somewhat familiar? But kinda sloppy in presentation?

No. Those are NOT MY Cream Cheese Pickles. 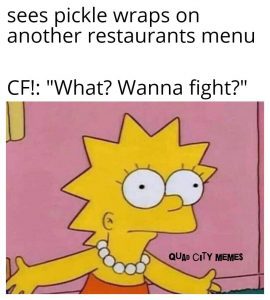 Being a person that operates with integrity and 100 percent originality, I have zero respect for people who shoplift from the corporation they previously worked for to create their own restaurant or people who snatch ideas from other establishments.

These pickles are a Midwest thing. I was taught to make them as a kid, and have made them since then.

Naturally, when I opened my little café it only made sense that I went with that rather than a standard pickle spear with my sandwiches.

I didn’t say anything when a local grocery store shoplifted my thing because that particular store does it often to locals. Gives them a deal to sell their stuff there just long enough to duplicate it and call it theirs.

After the year we’ve had and everything that has been taken from so many local establishments when I saw this come through my feed. 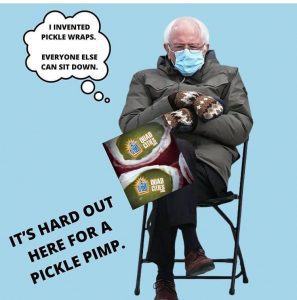 In an eatery setting, I made these something extra special.

My spot. MY RESTAURANT.

If you want to look like a real shithead.

You open an eatery after a “pandemic” (quotation marks hers… I’m not sure why; I’m quite certain we were in the midst of a pandemic over the past year-plus, but, I don’t know, maybe the pandemic is in the midst of changing its name to The Plague Formerly Known As The Pandemic or something) in the QC area where someone else had an original idea and made something famous for over a decade.

Definitely a fail move on the part of this meatball shop.

After the year we’ve all had though, one thing I’ve learned is so many people have no limits or standards.

This should not surprise me. 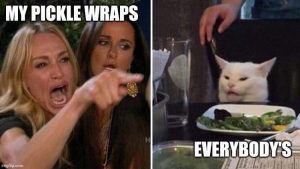 Support local does not include poorly imitating another local spot’s offerings.

And that was it. That was her post. Obviously seething, maybe having a bad day, obviously venting.

People were NOT happy. People were PISSED. You would’ve thought she had called Happy Joe a sullen guy, said Bix Beiderbecke was a horrible rapper, or that the Skybridge is a mind control device of the Illuminati.

Here’s a hand-picked, artisinal sampling from the roughly 327 comments on her post: 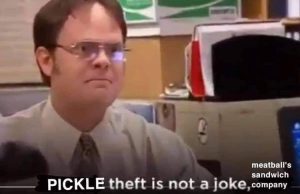 “Wow, in all my 33 years of life, I had NO idea you were the inventor. Wild!!!! Here I thought it was something my family made, and my friends family made for get togethers. I guess I better stop making pickle dip while I’m at it. I don’t want to be sued for copyright infringement.

Ps: Pickle wraps were invented in the 1950s and LOADS of restaurants have served them before you did. Whoopsies.

Ps: tearing down other businesses is the fastest way to lose business. If you were confident in what you do, you wouldn’t feel the need to make posts like these.”

(I was especially impressed by her use of the word Whoopsies. You just don’t see that often enough in Facebook comments. Let’s get that trending! Hashtag Whoopsies!) 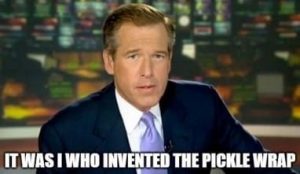 “Wait a minute, you invented pickle wraps? It’d be surprising to my grandma. I wonder what it was we were eating 40 years ago?”

(I hope it wasn’t your grandma’s cat. But if so, I hope it was served with pickle wraps on the side. They really do brighten any meal.)

“The AUDACITY. I hope you do some self-reflection after all of this.”

(I think all of us are about due for some self-reflection after this.)

“You see how they’ve deleted comments about how the owner was bashing another small business just starting up after the pandemic? Over pickles! Happy Anniversary to you and Matt, BTW.”

(I didn’t know Matt Damon was married to someone named BTW. Congratulations!)

“Actually I love these things. I think they are a pain in the ass to make my cream cheese never smooths out on the ham the way I want it and 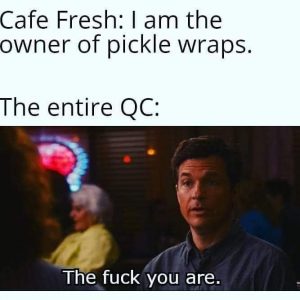 they don’t look picture perfect like these. Lol. I will come just to eat them as long as someone else is making them! Lol”

(You will? Is the earlier lady’s grandma available?)

“Unless you were opened sooner than your post implies, that’s just not true. My grandparents served these at their restaurant in Ohio in the 60s. Many places serve them, you’re not the first.”

(God damn! Put some ice on that burn!)

“Exactly how do you know this?? You know for a fact? Just really curious about the whole thing. Maybe we can write a post and make it public just to see how many people actually think they were the first person to serve them in an eatery type setting? How many restaurants actually claim it as their signature item?”

(At this point, probably close to 872 in the Quad-Cities alone.)

“They use whipped cream cheese, and get a handful and fondle it around the pickle. Then put it on the ham and roll it up.” 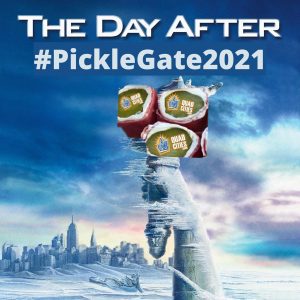 (Hey Beavis, she said ‘fondle it around the pickle.’)

“Signature item meaning- a food or drink a restaurant has CREATED and is known for.

Stop calling it your signature item you did not create this.

The exact genesis of the pickle wrap — or pickle roll-up as it is also called — is unknown, but Maulsby said the appetizer most likely originated as a modification of an old-world German recipe.

You must be kidding. It’s a pickle cream cheese and ham/beef. Shame. Shame. The entire Midwest makes them all summer long.

You didn’t invent these, you weren’t the first to serve them in a restaurant, and you just lost our business being so petty.”

(And if you can’t believe Maulsby, then really, what has this world come to?) 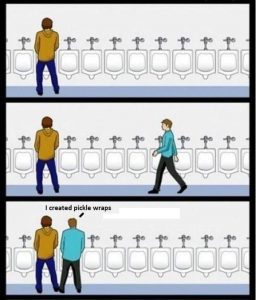 “I’ve been eating these things forever! We used budding beef though instead of ham.”

“Just claim you are the original inventor of deep frying things, and that your mom taught you to fry things. Then when people point out the inconsistency of that, claim that you are the first restaurant to offer deep fried things and that any other food establishment that offers fried food is a “shoplifter” and defend your statement to the death. You should be alright.”

(Thanks for the tip. By the way, have I mentioned that I’m the original inventor of deep frying things?)

“My mom’s bowling league at Highland Park would have potlucks occasionally. This was in the 90s and someone would bring pickle wraps made with beef wrapped around them. That’s when I fell in love with pickle wraps.”

I think that’s when we all did.

And then we had that romance rekindled last weekend, and throughout this week.

So, thank you, Cafe Fresh and Meatball’s, for reminding people that what’s really important in life is arguing on social media over strange food combinations our grandmas made us eat at family gatherings.

Next week: Harris and Happy Joes get into a plastic knife fight over pineapple on pizza.

Sean Leary
Sean Leary is an author, director, artist, musician, producer and entrepreneur who has been writing professionally since debuting at age 11 in the pages of the Comics Buyers Guide. An honors graduate of the University of Southern California masters program, he has written over 50 books including the best-sellers The Arimathean, Every Number is Lucky to Someone and We Are All Characters.
See More Articles From Sean Leary
Tagged: #meatballs#picklegate#picklewars#picklewrapsCafé Freshpickle warspickle wars 2021pickle wraps